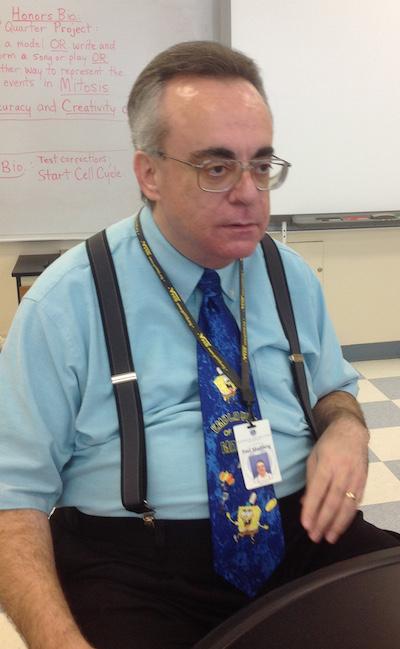 Photo Credits: Slosh reacts to being told there is life on Mars and potentially other forms of life in our universe.

On Monday, September 28, 2015 NASA Scientists discovered liquid water on Mars. This news has made scientists think now more than ever that there could possibly be life on Mars. Associate administrator for the Science Mission Directorate at NASA, John Grunsfeld, said, “the existence of liquid water, even if it is super salty briny water, gives the possibility that if there’s life on Mars, that we have a way to describe how it might survive.” Paul “Slosh” Sloshberg, one of Academy’s science teachers, has his own opinions about the possibility of life on Mars.

How do you feel about liquid water being discovered on Mars?

“How do I feel about it? I feel nothing. I am just unhappy they found out my secret.”

What do you think life on Mars would be like?

“Cold and you could not breathe”

Would you live on Mars?

Do you think there are aliens on Mars?

“There will be aliens soon because we are going to go there and we will be the aliens.”

Do you think there is other life in outer space?

“Right now, no but anything is possible”

Listen to the whole interview below: