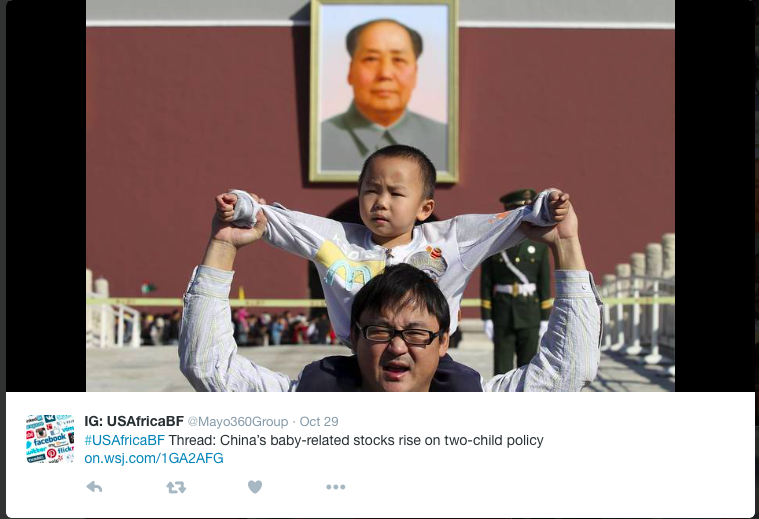 China first instituted its one-child policy in 1980 in a bid to control the country’s population, which is the world’s largest, at nearly 1.4 billion. China has now announced two weeks ago that they are ending the thirty-five year old One Child Policy. This policy has restricted couples from having only one baby and rural couples could have no more than two. The updated policy, the Chinese government says it will allow all married urban couples to apply for a second birth permit after having one child. As with the 2013 revision to the One Child Policy – which allowed couples where one member was an only child the privilege of having a second child – couples will have to go through the steps of applying for a birth permit. In addition, couples will likely still have to overcome restrictions such as being the correct age, from a certain type of family, and living in a particular location before being able to obtain a birth permit.

While the policy shifts, China is expected to bring more new investments and boost consumption at a time when the economy it is slowing, as well as also increase demand for higher wages and push up labor costs. Chinese authorities two weeks ago predicted that the new policy could raise economic growth by about half a percent and provide China with an additional 30 million laborers by 2050.

Women who are deprived from having kids is an awful feeling not being able to have a big family is not something a young women want. In today’s society, families are getting bigger and China is now allowing two babies in one family. Sophomore Sara Phillips comments how she feels that it’s too late and they should have made this change a long time ago but it’s good that they are trying to reform it now. China is improving and this is a big step for them to add another baby for families its a relief and satisfaction of women in china.Senior Jazzy Mendoza said, that China is going in the right direction and they are showing hope for those women who want more kids.