Politicians in the limelight 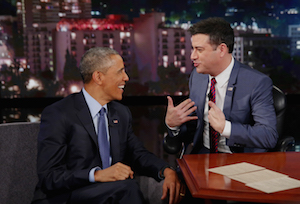 Since Bill Clinton’s presidency in the 1990s, almost every president since has had their own special seat on celebrity talk shows. Talk shows of today range from The Tonight Show With Jimmy Fallon, to Saturday Night Live and  Jimmy Kimmel, Live! Before these shows first aired, former presidents were featured on the popular late night shows such as The Arsenio Hall Show, Laugh-In, and Late Night With David Letterman. As much as it is entertaining, voters in the upcoming election have expressed that a president does not and should not have time for such shows. Protesters rallied outside while Donald Trump made his big debut on Saturday Night Live on November 7.  One senior, Aisling Carr, expressed how she felt about Trump going on Saturday Night Live, “I understand that he’s trying to target the younger population to become popular with younger people but many politicians try too hard and don’t come off as funny as they try to be.” According to Time magazine, this is because “we still expect it to represent us more closely” than the other famous comedy and late nights shows that air on television.

Surprisingly, almost every presidential candidate has appeared on Saturday Night Live. Taking time out of their campaigns may cause some ups and downs for the candidates, but, it’s good for the television ratings. Donald Trump brought the best ratings to Saturday Night Live since 2012, according to USA Today and Fox and Friends. According to CNN Money “Trump was also a hit with those aged 18 to 49 years old.”

Here is a shortened list of appearances made by presidents and candidates on late night talk shows:

43rd President George W. Bush: President Bush appeared on Late Night with David Letterman when he shared his List of 10 things he would change in the White House. For many the jokes are hard to understand but President Bush sure thought they were hysterical.

44th President Barack Obama: President Obama has appeared many times on television, with Jimmy Kimmel and Saturday Night Live, but nothing compares to what he has in store. President Obama is said to be a guest on Running Wild with Bear Grylls, a survivor show in Alaska.

2016 Presidential Candidate Mike Huckabee: Mike Huckabee appeared on Saturday Night Live’s, Weekend Update in 2008, while running to with the Republican nomination for President of the United States.

Despite those who feel like candidates should not be a part of shows like Saturday Night Live, there are still many who think it is beneficial to appear on them. Junior Chris Renner shared, “I think being on these shows is just another way to connect to the American people. Although it’s not strictly about their political platform or agenda, a lot of people just want to get a feel for candidates based on how they act so I think talk shows have some value.” Not only does it put the presidents and candidates in the spot light, it’s a great way to relax and too have a laugh.