What’s up with the new Speaker of the House? 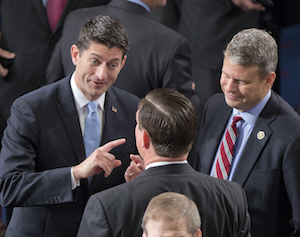 "The people of this country have done all of us a great honor. Now, let’s prove ourselves worthy of it. " - Speaker of the House, Paul Ryan

When Ryan had the support and votes of three House committees he agreed that he would run. John Boehner, who decided to resign shortly after Pope Francis visited, said his goodbye’s on the House floor, pausing here and there to grab a tissue and wipe his eyes. He spoke out about Ryan and how they knew each other from when Ryan was putting out signs on lawns for Boehner when he was running for the House.

After his goodbye, Trey Gowdy (R, South Carolina) nominated Ryan as the Republican’s nominee. When the final votes were counted, Democrat Minority Leader Nancy Pelosi wished Ryan well, as he won with the votes of 236 members of the House. Pelosi closed her speech saying, “This is the People’s House.  This is the People’s gavel.  In the people’s name, it is my privilege to hand this gavel to the Speaker of the House, the Honorable Paul Ryan.” Ryan took the job as Speaker of House after a lot of back and forth deliberation between the Republican party.When Ryan was finally sworn in and addressed the House he explained that “ It’s not till you hold this gavel…and stand in this spot…It’s not till then that you feel it: the gravity of the moment.”

My friends, you have done me a great honor. Thank you. #SpeakerRyan pic.twitter.com/sLYgmpH1Lv

“Let’s be frank.” Ryan said, “The House is broken. We’re not solving problems. We’re adding to them. And I am not interested in laying blame. We are not settling scores.” and that “When we are done, let us say we left the people—all the people—more united, happy, and free.” Senior Camille Yodzis shared how she felt about Ryan stepping up to answer the “call” to be Speaker of the House. “I give him respect because the job has to be done and he is probably going to enjoy it. He’ll probably stand out more than John Boehner and create a positive outcome in the House of Representatives.”

Ryan also called for bipartisan reform, telling both the Democrats and Republicans to pray for each other. He jokingly added that he didn’t mean for them to pray for a conversion. “What a relief it would be to the American people if we finally got our act together’ he said, ”what a weight off their shoulders.” Legislation in Congress and the House of Representatives was designed by our Founders to be slow and detailed but this Congress has been slower than it was ever intended to be. One of his goals for the House is for members to embrace their disagreements and he stated that they “have nothing to fear from honest differences honestly stated.” Ryan also noted that the American people and the Representatives have grown tired of how the House works. Senior Kristina Kennedy agreed that “It needs to pick up the pace a little.”   His call for change in the House has brought hope to both Democrat and Republican members. “No more favors for the few.” he said, “Opportunity for all—that is our motto.”