President Obama Gives the State of the Union 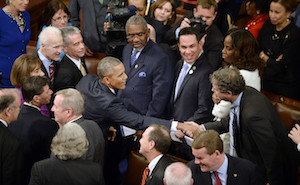 President Barack Obama recently presented the United States with the yearly State of the Union.

The SOTU is required by the Constitution to be given by the president each year in order to, “give to the Congress Information of the State of the Union, and recommend to their Consideration such Measures as he shall judge necessary and expedient.”

The President started off with a list of proposals he has planned for the upcoming year and America’s future.

He stated, “I want to go easy on the traditional list of proposals for the year ahead. Don’t worry, I’ve got plenty.”

A few of these proposals range from assisting students learn computer codes to personalized medical treatments. On the President’s “still needs to be done” list, he listed a few of the ongoing struggles that are facing America. These struggles included fixing the immigration system, gun violence, “equal pay for equal work,” and the minimum wage.

I'm treating this last State of the Union just like my first – because I'm still just as hungry. I hope you tune in, because it's for you.

AHN Senior Clarisse Ramos shared how she feels about the position our country is in.

“I feel like our country should be focusing on addressing problems such as equal rights and an equal wage gap for women, solving the debate about gun rights, and of course, choosing the right president for the upcoming election.” said Ramos, “Our economy has been better in comparison to four years ago as well. Now we wait for the wage gap between men and women to be addressed!”

In regards to the environment and the climate, the President wants our technology to work “for us, and not against us’ when making the necessary changes to protect our planet. Recently, President Obama attended the COP21, where a series of national leaders met to discuss the serious environmental issues of the attending countries.

Some of the disputed statements from his speech, as usual, revolve around economics and the military.

In his speech, President Obama exclaimed that, “We’re in the middle of the longest streak of private sector job creation in history. More than 14 million new jobs, the strongest two years of job growth since the ‘90s, an unemployment rate cut in half.”

Since a 5% unemployment rate is not half of the current 7.5%, a USA Today article pointed out that , “It’s only “cut in half” if measured from the worst point of his presidency, which was the 10% rate recorded in October 2009.”

Traditionally, a “Designated Surviver” is chosen around the time on the SOTU. One cabinet member is chosen not to attend the SOTU in case of a serious situation during the address and they are kept in a secret location surrounded by secret service.  This year it was the Secretary of the Department of Homeland Security, Jeh Johnson. Another SOTU tradition began in 1966, when Republicans responded to President Lyndon B. Johnson’s address. This year, the governor of South Carolina, Nikki Haley, gave the Republicans response to the President’s address. The past two Republicans to give the Republican response were Sen. Marco Rubio (2013), and Sen. Macelle Bachman (2011).

Fun fact, since it is not required by the Constitution to speak the State of the Union, from President Thomas Jefferson up until President Woodrow Wilsons’ address, most of the SOTU’s were only long written addresses.

At the moment, it is unclear who will give the next State of the Union Address, but as the election year draws near, the list of potentials grows smaller and smaller. Whether a Republican or a Democrat is chosen, the State of the Union will go on.