The State of the Race 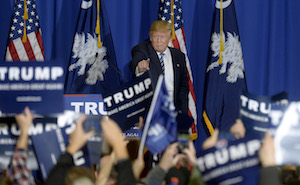 Donald Trump holds a rally in South Carolina before the Republican primary on February 20.

At this leg of the race, the candidates are fighting to win the most delegates because, to be the nominee, they need to have so many delegates. Now that the first caucus and the first primary of the 2016 presidential race have come to a close and the delegates have been divvied out, here’s what you need to know about the State of the Race.
1. Caucus V. Primary
Caucuses are the most commonly used method of electing a nominee. Many times, in a caucus, voters can show support and vote by “raising hands or breaking into groups according to the candidate participants support.” Primaries, on the other hand, require that votes be cast in secret.

What did the #IAcaucus look like? The @RegisterVisuals photographers give you a look. https://t.co/ckV3YwwGKP https://t.co/o1Zc4wg1nh

This is it, the moment the first votes of the #NewHampshire primary are cast in #DixvilleNotch https://t.co/VkngkCr5rE

AHN junior, Sydney Sommer, believes that, “They should figure out a more efficient system rather than flipping a coin to decide a tie.”

POLL: Sanders and Clinton in a national virtual tie pic.twitter.com/HbeeWmVRof

For Republicans, the winner of the Iowa Caucus was Sen. Ted Cruz with Donald Trump trailing behind him with only seven delegates. Pundits were quick to criticize Trump for his ego and self-confidence when he didn’t have the voter turnout he claimed he would have.

Cruz won eight delegates, Trump and Rubio won seven, Carson won three, Paul, Bush, Fiorina, Kasich, and Huckabee each won one, and the others received none.

In the New Hampshire Primary, Trump came out on top with a huge win. His winning margin was so large the race was called with only 4% of the votes in, leaving a large gap between him and runner-up, Governor John Kasich. Kasich, although he came in second, felt good about the results because he had attended over 105 town hall meetings across the state of New Hampshire in efforts to gain delegates.

3. Debates and polls really do matter

Many of the seemingly hopeful candidates realize they don’t have a chance after they see the results of the caucuses and primaries and as a result, many dropout. Since the Iowa Caucus, the number of candidates has significantly decreased. The two candidates that dropped out were Senator Rand Paul and Rick Santorum.

Debates have proven to bring out the best, and the worst, of the candidates. Marco Rubio found himself in trouble after a he was called out for repeating a memorized line during a debate with Chris Christie. Candidate Carly Fiorina, was left out of the debate and she claimed that it hurt her chances in the Primary.

Due to some of their debate dilemmas, Rubio, Fiorina, Christie, and Carson all suffered greatly in the New Hampshire Primary. Rubio apologized to his supporters and promised them that he will do better next time while Chris Christie,  Carly Fiorina, and Mike Huckabee all suspended their campaigns. On the flip side, there are many that don’t watch the debates.

Junior, Lexie Diez explained this is because “They are normally on pretty late and I don’t have a lot of time.”

Competition off the debate floor is an issue for candidates as well. On the night of the New Hampshire Primary, Ted Cruz’s staff released a statement saying that Ben Carson was dropping out and that they should vote for Cruz instead.

As the media discovers more facts surrounding Ted Cruz's campaign resorting to dirty tricks, even they are appalled.https://t.co/sOieTvJy8o

4.  There is still more time for the candidates (despite what many think)
Just because a candidate is leading now, does not always mean he will be leading later. In the past, Iowa has been “the first early indicator of the electorate’s interest,” meaning that a lot of what happens next in the race is influenced by the results. Only a handful of delegates have been won over. There is still over 2,000 unclaimed delegates for the Republican Party and the Democratic Party has a little over 4,000 available. Instead of 17 candidates, however, there is five left (not including Jim Gilmore who hasn’t dropped out of the race even though he has 0% of votes).

Wow, Jeb Bush, whose campaign is a total disaster, had to bring in mommy to take a slap at me. Not nice!

Whether he is right or wrong,

critics still don’t seem to worry him a bit.

*Since this story was published, multiple candidates have dropped out and/or suspended their campaigns. It is now between Donald Trump, John Kasich, and Ted Cruz*