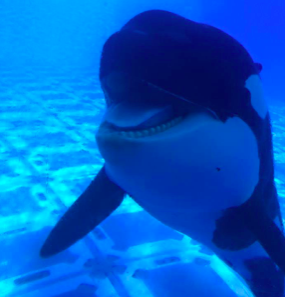 Sea World is a theme park known for their illustrious theatrical shows as well as other sea animals on display, including their 23 famous orcas. However, amusement-park operators announced on Thursday, March 17, 2016 that this generation of Sea World’s killer whales who were born and bred in their facilities will be their last. Sea World plans to immediately stop the breedings and slowly phase out their theatrical shows.

This action was due to the long-lasting effects from the release of the 2013 reputation-killing film that exposed the mistreatment and dark history of the park, Blackfish. This film caught national attention which claimed that whales become more aggressive as well as to each other if they were to be held in captivity. Their evidence was supported through the well-known story of Tilikum, known for the death of the Seaworld trainer Dawn Brancheau, who was downed and killed in 2010.

So #sad watching #blackfish for the first time!! ?

However, Junior Kate Reitz who volunteered at Clearwater Marine Aquarium and went to Career Camp at SeaWorld last summer argues, “My thoughts on Blackfish is that it was a lot of propaganda…It was a very biased work by someone who doesn’t know what was going on behind the scenes because they only got secondhand information.”

Reitz adds, “Then they cut to scenes of a trainer with a bloody nose with no explanation.”

However, Sophomore, Gillian Garcia, states, “I think it was very important for that movie to come out because Orcas are not suppose to be used for entertainment, they are wild creatures and we cannot forget that.”

On account of Blackfish, the People for the Ethical Treatment of Animals (PETA) as well as many animal right’s activists have spread the word about the mistreatment and advocated to end the breeding as well as the shows.

Reitz states, “There are very few marine parks that mistreat their orcas, but not a lot of people know about them unless they do thorough research.”

As of November of 2015, SeaWorld San Diego reported that they would end the theatrical orca shows in fall of 2017. This is due to the refusal of California Coastal Commission for them to breed more orcas in order to enhance their shows, which would threaten their presentation of their shows in the future. From this, more SeaWorld attractions in California have also decided to end their shows sometime in 2019.

From this, Sea World has created many ways to help save animal lives. With a laboratory, surgical suite, food preparation room, recovery areas, as well as an animal care staff, sea world strives to save the animals in need. With many rehabilitated animals already been saved, it is apparent that Sea World hopes to actually help animals that are in need out in the wild.

Reitz comments on their rescue program by saying, “Their rescue program is fantastic and has helped saved the lives of many animals. I’m really happy there’s going to be an emphasis on education; I think it will help show people the truth about what SeaWorld does and what they stand for”.

Garcia says, “It took them long enough to finally do that.”

Reitz comments, “As someone who knows what it’s like to be apart of a marine facility and has been behind the scenes of SeaWorld, their care for all of their animals is top class.”