How to Get the Most Out of Universal 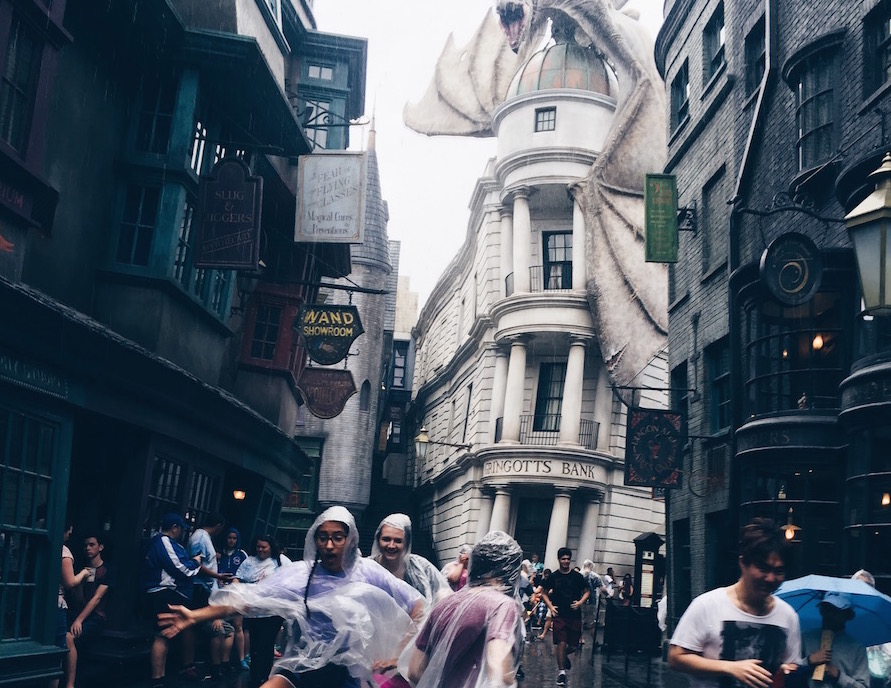 Tourists may be scared of the rain but that does not stop Academy girls from dancing in Diagon Alley. Credit: Grace Neal/AchonaOnline

Universal Orlando Resort is a hot spot for enjoying rides and attractions including classics such as Harry Potter, Cat in the Hat, or Jurassic Park. Although the park is still a popular destination in Florida, many visitors have begun to stray away due to long lines, bad weather, and sometimes the lack of entertainment. Despite these challenges, there are many ways to better the trip through packing accordingly and taking advantage of one of the many secrets Universal has within…

Why to bring this accessible fashion statement:

Knowing When and Where to Go

Planning before the trip, or during, is the best way to maximize time while at the park to avoid lines:

Before the trip, check out a crowd calendar to see what is going on at the parks on each day of the month, and see which parks in all of Orlando are least crowded

Senior and frequent visitor of Universal, Jenna Wiley advises, “the best time to go is in the fall, because people are still in school and because it will be less crowded and cool.”

Use the Universal Orlando Resort app for iphones which gives a map of both parks with updated wait times. This allows people to plan where they should go next to not wait in line, see the best shows, and get the most delicious food

Everyone is looking for the next best way to avoid long lines to popular attractions at Universal. The single rider line is the best option for doing so without cheating the system.

Available next to the main entrance on certain rides. Allows for riders to take any empty seats on carts for attractions
Cuts wait time in half
Works for groups of people, pairs, or single riders (with luck, riders may get placed next to friends)

Harry Potter World, no matter which park, is one of the most popular attractions at Universal. It holds hundreds of references to the Harry Potter series for wizards and muggles alike to enjoy.

Interactive Wands: activates certain “magic” areas in either Diagon Alley (Universal) or in Hogsmeade (Islands of Adventure) : $47.95 (regular wands are $39.95)

Other Stories blog claims, “If you get the interactive wand, you also receive a map of Diagon Alley and Hogsmeade that marks all the areas where you can do magic. If you go to the markers and say the correct spell, MAGIC HAPPENS! Unlock doors, make things fly, turn on lights, or make it rain.”

There is a phone box in London outside of Diagon Alley, that can connect anyone (including muggles) to the Ministry of Magic just by dialing MAGIC (62442)
In Diagon Alley at the Gringotts Money Exchange, near Harry Potter and the Escape from Gringotts, the goblin inside answers almost any question asked

Senior and annual pass holder Ally Wehle recalls, “Jenna, Grace, and I were doing fake accents in the Harry Potter and the Forbidden Journey line and we pretended to do an american accent to freak out the people in front of us.”

The best part about going to theme parks is riding roller coasters and all of the other attractions available. Universal has some of the most popular rides in the country including Harry Potter and the Forbidden Journey, The Amazing Adventures of Spiderman, and the newest addition, Skull Island: Reign of Kong.

The Hollywood Rip Ride Rockit allows for each rider to listen to their specifically chosen music to best enjoy the rides, yet when the music gets overplayed there are always more secret options. By holding the logo down on the screen in the seat, tons of more songs can be unlocked with simple codes

According to The Chive, “Superhero Island is covered with awesome artwork of different characters. Artist Adam Kubert painted them all, but he wasn’t allowed to sign his name. So instead he hid “Adam” in a bunch of different places in the art”

In the unfortunate event a ride breaks down and waiting felt like ages, simply ask for a ride fastpass for the wait time. This should allow up to five people in a party to skip the lines when the ride is working again

With all of these tips and tricks, Universal is a whole new source for fun and entertainment. Knowing when to go, where to go in the parks, and the secrets of the parks, makes any Universal trip easy to maneuver and saves time.