Is Donald Trump Giving Up the Election? 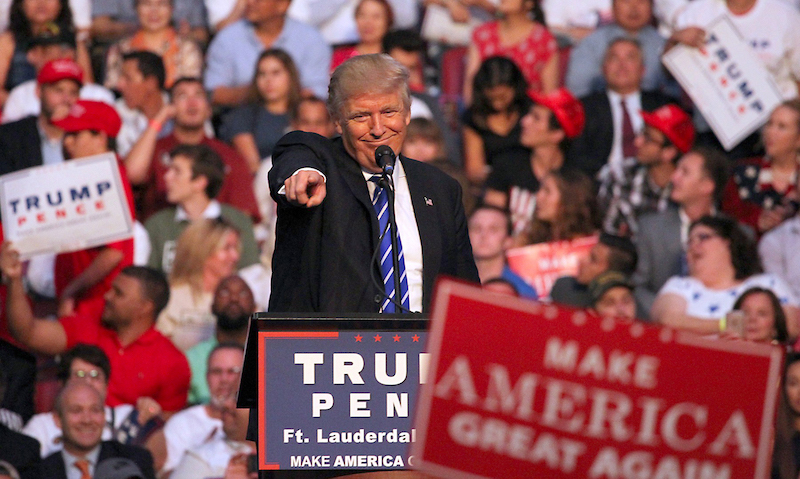 Republican presidential candidate Donald Trump has never been short of saying what’s on his mind. Since the start of his campaign, the entire world has kept up with Trump’s controversial rallies and interviews where he sparks tension with the American people and his own party. As November quickly approaches, many have noticed that Trump’s speeches have quickly become excessively threatening to his campaign, which leaves the question, is Donald Trump giving up?

From the start of Trump’s campaign, it was clear he did not care what people thought about him. He was and continues to be honest with the American people on his thoughts and plans for the country, however as time progresses, Trump’s words have gotten progressively harsher and are being taken as a serious threat.

Just recently, Trump was at a rally in North Carolina discussing Second Amendment rights where he targeted Hillary Clinton, sharing “If she gets to pick her judges, nothing you can do, folks. Although, the Second Amendment people—maybe there is, I don’t know.”

Senior Katie Hale believes the public’s interpretation of this quote was taken to the extremes, adding “If someone would’ve said ‘oh don’t worry the doctors will take care of her’, or some other group, people would’ve taken it as ‘are they really going to lobby for this.’ rather than, he’s targeting her.  Especially with social media, this is a big issue. It’s getting out of hand.”

Although Trump did recover the statement during an interview with Fox News, people took it as though he expected Second Amendment supporters to target Hillary Clinton. Following the accusations, Secret Service revealed Trump is under investigation for the second time during this campaign trail.

In addition to this claim, Trump targeted Clinton and President Barack Obama while at a rally in Sunrise, FL on August 11.

The Republican candidate claimed ISIS members are followers of President Obama, adding,  “ISIS is honoring President Obama. He is the founder of ISIS. He is the founder of ISIS, OK? He’s the founder! He founded ISIS! And I would say the co-founder would be Crooked Hillary Clinton.” After these comments were made, Trump was featured on The Hugh Hewitt Show where host Hugh Hewitt attempted to correct the presidential nominee statements, however, he refused to back down.

Ratings challenged @CNN reports so seriously that I call President Obama (and Clinton) "the founder" of ISIS, & MVP. THEY DON'T GET SARCASM?

Trumps poll numbers and campaign itself are taking the heat as Trump continues to make harsh allegations about the nation’s current president and running mate Hillary Clinton. Republicans themselves continue to refuse endorsement deals, and some have revealed they will not be voting for Trump. During the Republican National Convention, fellow republican running mate, Ted Cruz, refused to endorse Trump. In addition to Cruz, former 2012 presidential nominee Mitt Romney along 2016 republican nominees John Kasich and Jeb Bush will not be voting for Trump in the upcoming election.

Despite the rocky road Trump has endured during this election, the politician hinted that he had no desire of giving up after he hired a completely new staff to run his campaign.

Beth Chase, who is teaching the ongoing Election class, believes Trump is not giving up the election adding “he wouldn’t have hired a new campaign manager if he was giving up. He knew he had to change especially after he dropped significantly after the convention.”

After hiring a new staff, the businessman turned politician named Steve Barron the senior advisor of his campaign. Barron is a former member of the United States Navy, a former investment banker, and now is taking on the role of redeeming Donald Trump in the polls. The question stands, can he do it?

Chase believes isn’t sure if Trump can redeem himself adding, “that’s why he knew he had to hire someone new, bring in some new blood. The person he hired is very conservative and is very big on conspiracies. I think we’re going to see a lot of conspiracy things going on. The quote I read was that he’ll do whatever he has to do to win”

Although his extremist ways have negatively effected his poll numbers, Trump revealed in an interview “And, at the end, it’s either going to work or I’m going to- you know- I’m going to have a very, very nice long vacation.”

With nearly 80 days left until the election, Trump has plenty of work to do in order to win his seat in the White House.