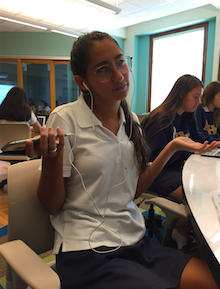 Although she was upset at first, senior Meredith Butler admits, “I see now that Apple had to do something big”. Credit: Jessica Zakhary/Achona Online

On September 7, the iPhone 7 was announced and Apple executives revealed a significant new feature. The company has discontinued use of the headphone jack, and has designed wireless earbuds.

These earbuds will need to be charged and will work by connecting to your phone’s bluetooth. Their self-proclaimed “courageous” statement has sparked controversy, especially amongst people who rely on the headphone jack to play music in the car, at school, or whenever they may need it. AHN girls, who definitely enjoy listening to music while studying or driving, share their thoughts on Apple’s big change.

The junior duo are both disappointed in the loss of the headphone jack and what it may mean for their car rides.

Besides the need for extra space for upgraded technology, Apple removed the headphone jack to keep up with the ever changing tech world as they strive to achieve a wireless standard.
Nina Perez

Perez, sophomore, is impartial but admits she’ll still probably be purchasing one.

Freshman Munera is excited for the new changes Apple is bringing with its new iPhone 7.

the iPhone 7 starts at $649 and the 'airpod' headphones are sold for an additional $159 pic.twitter.com/M5gOwDAWn7

While everyone is still shocked over the loss of the headphone jack and what it may mean for their music playing, it seems that people are slowly coming around to the idea of a new, wireless era.