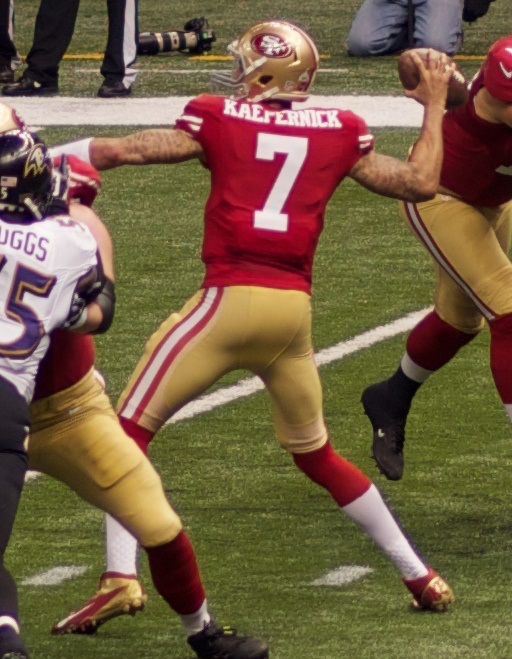 When Kaepernick was in fourth grade, his dream was to become a player for the San Fransisco 49ers.

Colin Kaepernick, quarterback for San Francisco’s 49ers, has been a hot topic this past week. At a recent game, Kaepernick refused to stand during the National Anthem which created an uproar among Americans. The quarterback claims that his reasoning is due to the injustice and oppression of black people in The United States.

Kaepernick is biracial and was adopted and raised by a white family. He has always been passionated about the Black Lives Matter movement, claiming that “this is bigger than football and it would be selfish on my part to look the other way.”

The NFL celebrity also uses social media, such as Twitter and Instagram, as a way to discuss the racial issues.

His decision to sit during the Anthem was a huge risk, considering that he could lose his sponsorships or even his career in the NFL. He responded to the potential threat of his career by stating, “I am not looking for approval. I have to stand up for people that are oppressed… If they take football away, my endorsements from me, I know that I stood up for what is right.”

Most people disagree with Kaepernick’s actions because the American flag symbolizes freedom and honors the troops fighting for that freedom.

Senior, Domenica Howard responds to his actions passionately claiming, “He has the freedom to say his opinion, but it was extremely disrespectful. He could’ve spoken about the issue after the National Anthem, or even at a rally.”

Junior, Emma Heston also disagrees with Kaepernick’s actions, and even compares this issue to another NFL controversy regarding quarterback Tim Tebow by stating, “Tim Tebow wasn’t allowed to have bible verses written under his eyes, but Colin Kaepernick is allowed to wear socks that have pigs with police caps, which I find disrespects the police. There are way more good cops than bad cops.”

As a response to the uproar of Kaepernick’s actions, the 49ers removed him from his previous starting position as quarterback. The “misunderstanding,” according to Kaepernick, led him to donate one million to organizations that help people affected by racial injustice.

Whether Kaepernick’s intentions were meant to act positively on the racial issues happening in America, his actions caused a shift in the NFL and around the nation.