Mother Teresa declared a saint by the Catholic Church 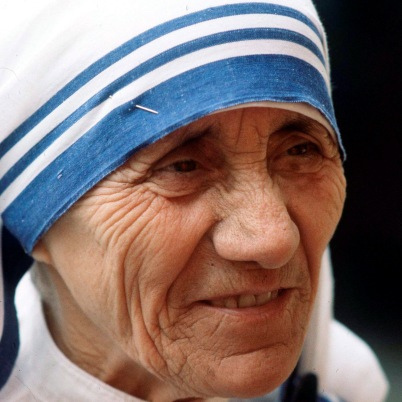 Mother Teresa knew she wanted to become a Nun at age 12.

On Sunday morning, September 4,  Mother Teresa of Calcutta was declared a saint in a Canonization Mass held by Pope Francis. Mother Teresa was well-known around the world, well before receiving the title of a ‘saint’, due to her work devoting her life in India helping the poor.

She founded the Missionaries of Charity, a Roman Catholic religious congregation who runs homes, clinics, kitchens, programs, orphanages, and schools for “the poorest of the poor” in 133 countries, and has devoted her life to working and training new sisters in the congregation. The Catholic Church also credits Mother Teresa with having performed two miraculous cures of the sick throughout her lifetime.

They're up there, praying for us. Can you feel it? #amen

In the Canonization Mass, Pope Francis explained the process of becoming a saint and the qualifications that one must have, declaring Mother Teresa as “the saint of the gutters.” Thousands of people cheered as her canonization was announced in Saint Peter’s Square in the Vatican City before the Pope was even finished.

Throughout the Mass and celebration of canonization, a huge portrait of Mother Teresa hung from St. Peter’s Basilica as Pope Francis delivered his homily, in which he praised Mother Teresa greatly.

Pope Francis claimed, “Mother Teresa, in all aspects of her life, was a generous dispenser of divine mercy, making herself available for everyone through her welcome and defense of human life, those unborn and those abandoned and discarded.”

Let us carry Mother Teresa’s smile in our hearts and give it to those whom we meet along our journey. pic.twitter.com/YNGkhd9Z6m

Saint Teresa of Calcutta greatly impacts the community at Academy, as well as the Catholic community as a whole. Although she passed away in 1997, she is considered to be a modern saint in society, acting as a figure for people around the world to look up to.

Senior Lindsay Calka explains that “at this time in history, we need a little hope and being reminded of Mother Teresa and her message is really important. It serves as a little wake up call that a saint walked on this Earth at the same time we thought it was being controlled by suffering and terrorism.”

Didn't take long for our @ckslions classroom to get the "upgrade"…St. Teresa of Kolkata, pray for us! pic.twitter.com/bQdFnd7hsc

Saint Teresa’s memory still lives on just as strongly as if she were alive. Today’s teenagers, who were born and grew up after her death, are still very familiar with her life’s work through the Missions of Charity and the humility that she maintained through her fame.

Junior Gillian Garcia remarks, “I remember growing up and hearing all these stories of her helping out and devoting her life to help the extremely poor people around the world, not even realizing that she had already passed away until I was much older.”

Along with the Missions of Charity carrying out her work and expanding their involvement in many countries that refused help at first, the Catholic Church now more than ever pushes people to follow Saint Teresa of Calcutta’s lead of helping the poor in whatever way is accessible.