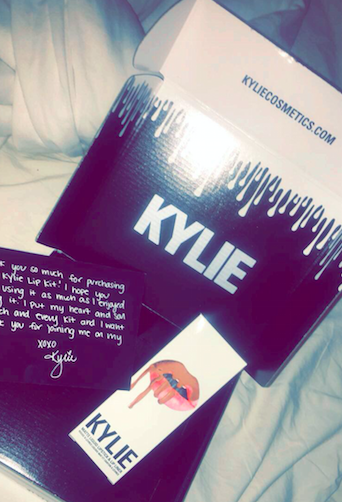 The Kylie Lip Kits come packaged in a recognizable black or white box with the Kylie Cosmetics logo, lip gloss dripping from lips, on it. Inside the box is the liner, gloss, and a note from Kylie.

Although Jenner has a wide fan base and the makeup has popular color choices, the brand has received an abundance of backlash due to the poor quality of the products. Heidi Hamoud, a popular Australian makeup artist and YouTube blogger, posted a negative product review of the Kylie Lip Kit to her Youtube channel, bashing the value of the product.

Despite the makeup regularly selling out, Academy students agree with Hamoud and reveal their complaints about the products after ordering the lip and eye makeup.

Freshman, Olivia Tremonti states “I was highly disappointed about the quality of my Maliboo Kylie Lip Kit. I loved everything about the gloss in the kit, but the lip liner broke the first time I tried to use it. I emailed the company asking for an explanation, a refund, or to be sent a new liner; however, I have still not received a response.”

Also disappointed with her products from Kylie Cosmetics, sophomore Nina Perez claims “I bought a KyShadow bronze palette, but after receiving the shipment, I realized I had overpaid for it. I bought the eyeshadow for $42.00, but it [Bronze Palette] was kind of small and there was no mirror. Although I loved the nine different colors in it and the pigmentation is great, I did not really think it was worth all the money for how small it was.”

Hoping to find a solution for her unsatisfactory purchase, senior, Allie Weachter, sold her lip kit to another person because she “thought the color of the lipstick and liner would be different. On the website the color ‘Moon’ looked different to me than it did in person. Although I liked the color that it was when it came in, it was similar to something I already had and was not what I was looking for.”

Along with these concerns, there has also been backlash about the broken lip gloss wands. Jenner responded to these unhappy customers and sent a new brush to everyone who ordered one of the dysfunctional wands.

I can now confirm that next week we are sending new brushes to EVERYONE that ordered on 4/1 ?

Junior, Emily Anderson, who was lucky enough to receive a functional replacement brush, exclaims, “After I got my replacement brush and was able to use my lip kit, I never had anymore problems with the brush!”

Although the brush concern has been solved, there are still many problems with the brand that are in the way of Jenner becoming a true makeup mogul. However, there is still hope for a successful future.