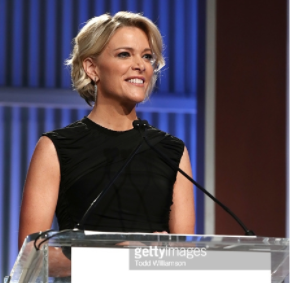 In a Twitter response to a fan about her new book called Settle for More, Megyn Kelly said the memoir is "very uplifting with some tears along the way." The book is an account of Kelly's experiences as a female journalist, as an anchor at Fox News, and as a debate moderator in this presidential election cycle. The book is available for purchase on Amazon.com

Megyn Kelly is an American reporter who has worked at Fox News for the last 13 years. Since 2013, she has hosted a nightly segment on Fox Network called The Kelly File. As of January this year, Kelly has decided to leave Fox and move to NBC.

Kelly’s life exploded into the public eye in this election cycle beginning at the first GOP debate on August 6.

She posed this controversial question to Donald Trump.

“Mr. Trump, one of the things people love about you is you speak your mind and you don’t use a politician’s filter. However that is not without its downsides, in particular when it comes to women. You’ve called women you don’t like fat pigs, dogs, slobs, and disgusting animals.”

At this point Trump interrupts and says, “Only Rosie O’Donnell.”

The crowd erupts into laughter, but Kelly continues with her question.

“Your Twitter account has several disparaging comments about women’s looks. You once told a contestant on Celebrity Apprentice that it would be a pretty picture to see her on her knees. Does that sound like the temperament of a man we should elect as president, and how will you answer the charge from Hillary Clinton, who is likely to be the democratic nominee, that you are part of the war on women?”

Trump retorted through the media that Kelly was biased, and attempted to sway Fox News Chief Roger Rails to prohibit Kelly from moderating the next debate.

This drew a storm of attention to the feud from viewers who felt Trump’s comment was a patronizing, rude, and unprofessional suggestion of menstruation.

4. When Megyn called out Trump for crude comments about women at first GOP debate, the Fox audience took Trump's side.

Trump says 'only a deviant' would think his comments about Fox News host Megyn Kelly were referring to menstruation http://t.co/sZb9TAGTQP

They reached a stalemate as Kelly and Rails demanded an apology from Trump, and he refused to give one; suggesting that Kelly should apologize to him for her “inappropriate question.” Kelly stated she “will not apologize for doing good journalism.”

Against the background of Fox’s conservative coverage and the partisan climate of the election, Megyn Kelly could be seen as a moderate or even liberal Republican. She certainly disagrees with Trump on some fundamental levels, and has moved networks to NBC which tends to swing more left than Fox. The question that many people are left wondering is, was the chaos of this presidential election cycle enough to push Kelly’s political ideology to the opposite side of the spectrum? Is this a publicity stunt to sell more copies of her book, Settle for More? Is she simply getting paid more at NBC?

The ideology question: Megyn Kelly has identified as an independent for two years now. According to an analysis on Variety, Megyn tends to have a liberal perspective on social issues like women’s rights, but a more conservative perspective on monetary issues like taxes and public healthcare.

The fame question: Quite probably, yes. Any publicity is good publicity. Kelly is famous on her own however, so it is hard to imagine this being the primary reason for her move.

The money question: Kelly’s prospective salary at NBC has not been released, but according to a recent New York Times article, Fox was willing to pay upwards of $20 million to keep Kelly on their network.

It has been highly suggested that Kelly made the move because a daytime show would give her more flexibility to attend to her duties as a wife and mother.

She said in her farewell message to Fox News, “And that after all is why I believe we’re here: human connection. The truth is I need more of that in my life, in particular when it comes to my children who are seven, five, and three.”

@megynkelly enjoy more family time. I've enjoyed your work and am grateful to have been a guest. God bless the next step

Megyn Kelly left Fox News for NBC, do you know why? Because it wasn't about the money. She wanted time for her family. A smart woman.

Kelly’s daytime show will be similar to 60 Minutes, according to The New York Times, and will air Monday through Friday.