The March for Life: Exploring Academy’s Past Experiences and Recent Absences 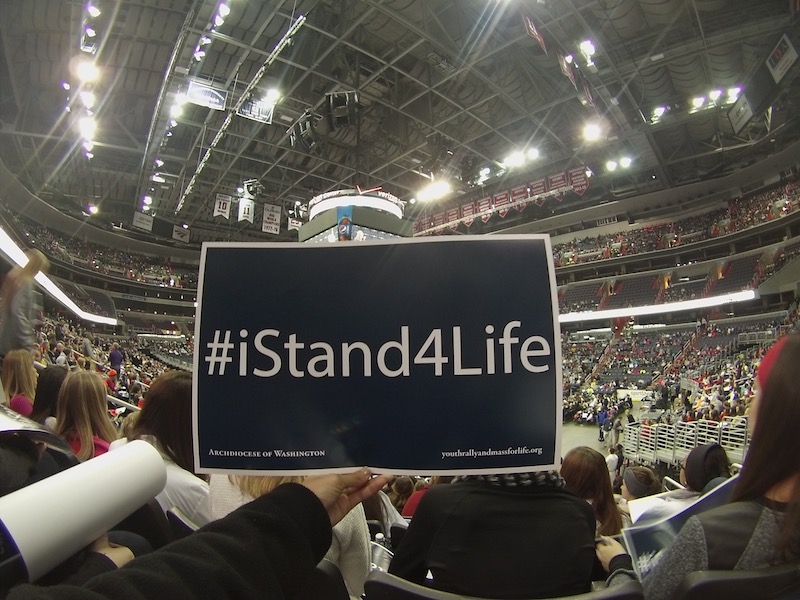 Thousands of pro-life advocates gathered before the March at a prayer service in memory of all those lost to abortion. Photo Credit: Audrey Anello/AchonaOnline

Braving the 35 degree temperatures in Washington D.C. on January 27, 2017, hundreds of thousands of pro-life advocates marched in front of the Capitol. These citizens are a voice for unborn children who have fallen victim to abortion in the last 44 years or who may continue to under the Supreme Court Decision, Roe v. Wade.

Every year, the March for Life includes aspects such as powerful signs, enthusiastic marchers, and cold weather, but for the past two years it has been missing one extremely important quality: the strong, compelling voices of the young women who represent Academy’s Respect for Life Club. On its 44 anniversary, the March for Life remains the strongest force of pro-life supporters in the country, with its attendance numbers rivaling the Women’s March on Washington just six days prior.

Sister Mary Glavin, Respect for Life Club President Teresa Toranzo, and Theology teacher Mr. Felix Kalinowski are three members of the AHN family who wish to see Academy return to the March to represent the Sisters of the Holy Names and their values again in the near future.

After attending the March twice, Toranzo shares her thoughts on the absence the club has had the last two years and says, “It is upsetting because I feel like all of us want to go, but I mean it’s out of our power so we can’t really do anything. I just hope that next year Academy will be able to not let the hiatus we’ve been on continue.”

Toranzo continues, saying her experience at the March was “so much fun, definitely one of the best trips of my life. We went solely to go march. Girls put any differences aside and came together to support the babies.” 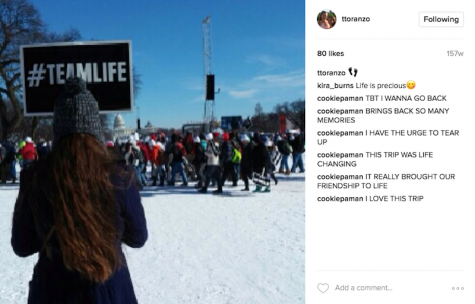 Toranzo recalls the supportive role that Theology teacher Mr. Felix Kalinowski had in her two trips. In an interview, Kalinowski responded to the fact that Academy has not recently attended the March for Life:

ACHONA: What was your experience with attending the March for Life with Academy students in 2015?

Kalinowski: “Oh, the experience was awesome and we had a great time. The girls were just very nicely behaved and there were absolutely no problems.”

A: How do you think the March affected girls beliefs? Did it make them stronger in their faith?
K: “I don’t know about faith necessarily. Something like this, seeing all these people for one cause while being nice about it all coming together, it’s going to have an impact on you. I think that most of the girls would say that after going they understand that they have to be more respectful of life in general and set an example to people as to why we should be for life. The March for Life isn’t necessarily just a religious experience, but it is a spiritual experience. I’ve seen signs that say ‘Atheists for Life’, it’s more about faith in humanity.”

Atheists who march for life are awesome. This isn't simply a religious issue. It's a human rights issue. #MarchForLife

Even though abortion is thought of as primarily a women’s issue, Jesuit Junior and March for Life attendee Josh Cruz doesn’t hide is passion for this seemingly “strictly female” issue.

He says, “It was awesome to see how many Jesuit guys and other men were there in support of an issue that’s thought of as solely a woman’s issue, especially Mike Pence and Benjamin Watson. Bringing a new life into the world is just as much a man’s responsibility as it is a woman’s, so it’s a little weird that Academy’s club hasn’t been in two years. Hopefully they’ll get to come next year and see how much fun it is to be a part of something so big.”

Respect for Life Club moderator Ms. Megan Dubee says, “I would definitely like to see the club be more active in Tampa and our local area. We didn’t go last year which was mainly a response to some parents concerns about travel threats.”

Dubee continues regarding Academy’s chances of attending in 2018 saying, “I was hoping that doing local activities this year would earn students ‘credits’ to go to the March in the future. But I don’t know if we’ll be able to go since it’s up to them [Mr. Art Raimo and Mrs. Erin Krukar] to make the final decision for all school trips.”

Because Academy’s voice as a whole was not represented, a handful of Jaguars decided to travel individually with their parishes to participate.

Juniors Maddy Ruppel and Haley Hemmings took Sister Mary Glavin’s advice when she said, “I would like to see the Academy be able to go to the March and have a more pro-life presence, but I think it’s mostly something you could do through your parish.”

Ruppel and Hemmings participated through their parish and elementary school, St. Lawrence.

Several other Catholic schools in the area were in attendance, including Academy’s brother school Jesuit, Bishop McLaughlin, Tampa Catholic, and St. Pete Catholic.

Tampa Catholic Senior Kira Burns says “I wish more Academy girls could experience the feeling of love and kindness that the March instilled in me. I think Academy girls would enjoy this experience together every year because you guys are already sisters, so exercising your rights together would be even more empowering.”

in honor of the March this morning #whywemarch to be a voice for the voiceless ❤️👶🏽 pic.twitter.com/zeD7YGf2eU

Although students took initiative by participating with their parishes, showing solidarity for life as a Catholic all-girls high school is a pertinent aspect in the Catholic teachings that the Sisters of the Holy Names uphold. Core Catholic values reflect and promote a strong united force dedicated to various causes that the Church supports. It is unclear whether Academy will return to D.C. for the March for Life, however, students will work locally to promote the agenda of the Pro-Life movement with hearts eager to stand up for the unborn babies who cannot stand up for themselves.