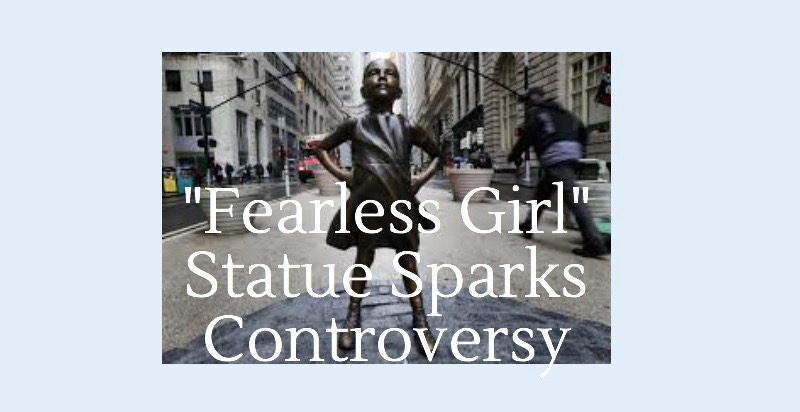 The “Fearless Girl” statue has become a symbol of female empowerment since its installment in March.

Although it is still early in the year, 2017 has been filled with several movements to promote achieving gender equality. One example of these efforts is the installment of the “Fearless Girl” statue within New York City. The statue was installed to commemorate International Women’s Day, which occurs on March 8 of each year. The girl that is depicted by the statue stands defiantly facing the well-known “Charging Bull” statue. The statues are located on Wall Street, and have since been a topic of controversy.

Freshman Sarah Munera said, “I think that the ‘Fearless Girl’ statue promotes certain characteristics, such as bravery and strength, that are important in order to set an example for young girls and women everywhere.”

Pleasantly surprised to find 'Fearless Girl' attracting so many other fearless girls pic.twitter.com/0WKcFnolCw

The artist behind the “Charging Bull” statue, Arturo Di Modica, has spoken out against the placement of the “Fearless Girl.” Di Modica claims that the statue takes away the meaning behind his work. In addition, he believes the statue is being used as a marketing tool rather than a symbol promoting gender equality. Di Modica’s justified this belief with the statement that was placed on the original plaque in front of the “Fearless Girl” statue.

The plaque said, “Know the power of women in leadership. SHE makes a difference.”

I agree that "Fearless Girl" without the sales plaque is empowering, but I think she should be moved to not misappropriate "Charging Bull".

The plaque references the SHE Index launched by the State Street Global Advisors. The SHE Index promotes gender diversity within corporate jobs. After receiving backlash, the original plaque was removed.

Sophomore Gabby Boyd said, “I think the statue is great. Those who are offended by the statue are being ridiculous because it doesn’t belittle the meaning of the Wall Street Bull.”

Although it is receiving negative responses, the “Fearless Girl” statue has also received a positive response. It has become a symbol of female empowerment. Social media has exploded with pictures of women and young girls posing next to the statue. A petition has been started to make the statue a permanent part of Wall Street. The original permit for the statue lasted only until April 2, 2017, but has since been extended until February of 2018.

Whether the “Fearless Girl” statue becomes a permanent part of Wall Street or not, the statue has still succeeded in furthering the efforts to bring awareness to the need for gender equality and diversity within the United States.