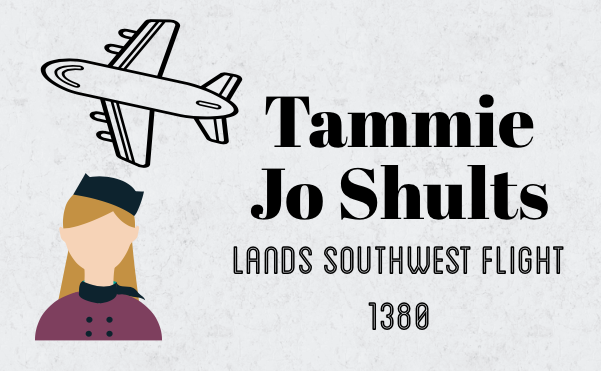 Although there was one fatality and seven injuries; Shults was able keep the passengers calm and prepared as she performed a rough single engine landing.

On Tuesday April 17, 2018, Southwest Airlines flight 1380 going from New York to Dallas, had an engine malfunction 20 minutes after takeoff. Before the flight reached cruising altitude, the left engine exploded and a piece of debri from the engine shattered a passengers window, causing passenger, Jennifer Riordan, to be partly sucked out.The depressurization of the cabin panicked passengers while Captain of the flight, Tammie Jo Shults, steadied the plane and prepared for a descent.

Please see below a statement from the Captain and First Officer of Flight 1380. pic.twitter.com/RjoCpucGGS

Shults grew up next to an Air Force base which influenced her into pursuing a piloting career. Before she became a Southwest Pilot, she was one of the first female fighter pilots in the United States Navy in 1993.

The 56 year old Navy fighter pilot veteran had to: immediately shut down all fuel to the damaged engine, declare an emergency with air traffic control, and lower the airplane to 10,000 feet so the passengers could get enough oxygen.

The Boeing 737 aircraft, carrying 149 people, made a controlled emergency landing in Philadelphia, Pennsylvania, where The National Transportation Safety Board investigators believed a fan blade was the culprit that caused the engine to explode.

Women make up 6.33% of commercial pilots and although Shults faced a lot of disadvantages throughout her piloting career; she has proved to be a heroic example within a male dominated career.