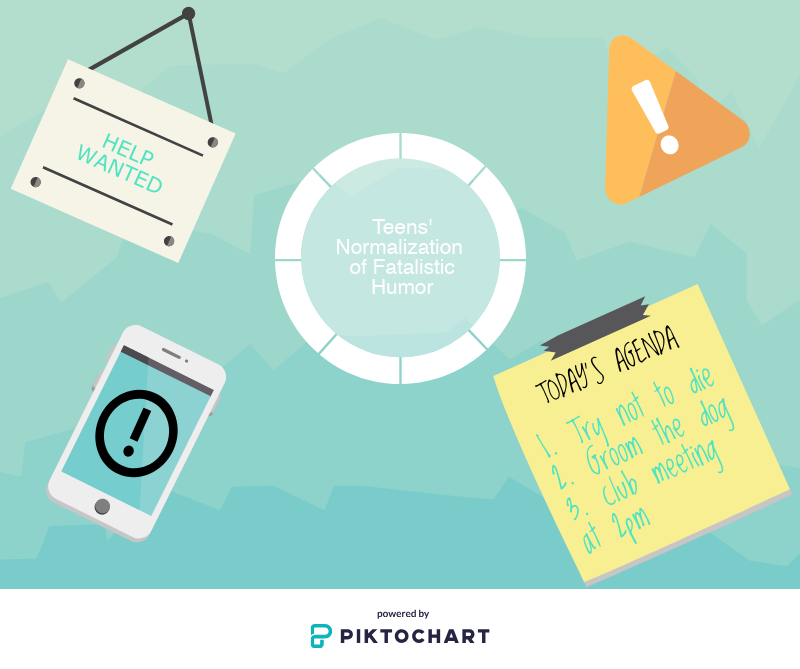 In 2011, Stanford psychologists conducted an experiment which found that it is scientifically proven that dark humor helps us cope with "horrifying images".

The use of slang amongst teenagers has been a predominant aspect of teen culture for generations. These terms tend to vary by generations, but they have the one commonality of confusing the respective adults and parents surrounding the individual circumstances. From terms such as “backseat bingo” in the 1950’s to the perhaps the more infamous “eat my shorts” of the 1980’s, teenagers have yet to fail in creating their own language specific to their culture. While this phenomenon may not be new, the teenagers of today have adopted some new slang which may prove to be a “sign of the times” in terms of the atmosphere they are growing up in.

Recently, teenagers have begun to incorporate the use of “fatalistic humor” into their everyday vocabulary. Despite what the term may lead some to believe, this new trend has no connection to the philosophy of “fatalism”, and is instead the nonchalant use of phrases such as “I want to die” and “I’m going to kill myself”. The occurrence has been proclaimed a millennial trend, yet the lines of just how far the “millennial” lines cross has been blurred and it is safe to say the trend also applies to those currently in high school.

Omg yesterday I texted my mom 'i wanna be dead lmao' and now she keeps asking about how I am and what's the matter with me. Sometimes I forget old people don't understand fatalistic humor 🙄

“For me, it’s not actually like I want to die. But when I’m crying and stressed, that’s just the automatic response. And the sad part is that I recognize how unhealthy it is but it’s just become so normalized. Even amongst my friends, I’ve recently realized the extent of it. In response to this I created a list in order to keep track of just how many times it happens within a day. Hopefully, it will result in all of us eliminating the use of it because we can see how out of hand it’s gotten,” says Chanita Belcher (‘19).

There is much controversy surrounding this subject and the effects that it may be having on the mental health of teenagers who regularly abuse this type of language. There are some individuals who feel that allowing this type of humor to become normalized creates an unhealthy atmosphere which promotes morbid thoughts and suicide.

“I don’t like to use phrases like that, and it’s not something I like to be around so it can be really impactful to see it thrown around so carelessly. I honestly think it’s harmful to how we think in our daily lives and it contributes to our negative attitude about certain things that we experience,” says Grace Odmark (‘22).

Though there are many individuals who genuinely believe in the negative effects trivializing these significant subjects has on teenage society as a whole, there are still a considerable amount of people who do not believe it has any effect at all. In fact, many people believe it is a completely healthy coping mechanism for those who suffer from depression.

I've adopted fatalistic humor in my daily routine to cope with the overwhelming dread I feel when I wake up.

Olivia Mortellaro (‘21) says, “I think that dark humor like that helps people to relieve stress in a way that may seem dangerous, but in reality has no real truth behind it. Sometimes saying stuff like that is just an outlet for your frustrations. At the end of the day, it’s just words and it’s not hurting anybody.”

While the debate surrounding the effects of this phenomenon is an incredibly predominant aspect of the trend as a whole, there is an additional question to be asked concerning how it manifested in the first place. Though there is not a specific moment or occurrence it can be attributed to, some people have their own theories regarding its source.

“I think that this trend is really the result of not only the new appliances we get to grow up with, but also the atmosphere of the world which we are growing up around. I think that with all this tragedy happening around us, all of the violence which is occurring in the world today, and the fact that it is all at our fingertips with social media, it really affects how we think about things like this. We use this type of language because it’s a way to cope with everything that’s really happening in a less serious way. I think that yes, we are desensitized because of social media, but in a way we have to be desensitized or else we risk letting it all seriously affect how we live our lives,” says Caitlin Neal (‘19).