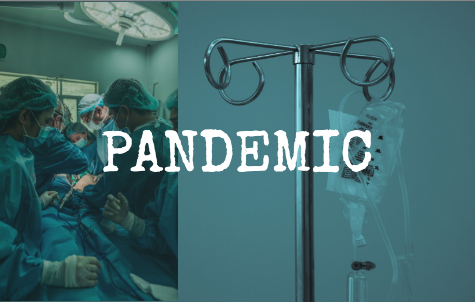 Airing on Netflix in 2020, PANDEMIC explores many scientists and the measures they are taking to prevent an outbreak.

One of the most impending crises’ in our world is the health crisis. Every year, it seems as though more and more cases of the flu and disease make national headlines. As researchers realize this trend, they are taking cautions to prevent new strands and restrain an outbreak when it arrives.

In 1918, a worldwide influenza spread, affecting 300 million people, a third of the world’s population. It had a species impact and global impact, killing more people than World War 1 and World War 2 combined. The next pandemic, doctors believe, is not an if but a when. Unlike 1918, however, our modern world has over 2,000% more people, global transportation, agricultural factories, and immense animal farms.

“[An outbreak] poses an existential threat to us as a species.”

The documentary follows the research of scientists such as Dr. Syra Madad, whom this film centers around, Dr. Dennis Caroll from USAID, and Jake Glanville, working to create the world’s first universal flu vaccine (Centivax), hopefully, finalized by 2025. The film explains the rapidly mutating influenza virus (i.e. new “strands” and annual flu shots) and the research done with animals to predict what the year’s strand might contain.

The film also depicts the concerns of the medical community about the public’s reaction to what they refer to as a health crisis’. In 2014-2016 the Ebola virus was the most feared disease in the world, making national headlines for its quarantined patients. However, although Ebola is a very contagious virus, it is transferred only by physical contact and Ebola patients were limited to three West African countries, a couple causes in Europe, and one in Dallas. The Ebola virus killed 30-50,000 people in the two years it made news, while the common flu virus (preventable by vaccination and respiratorily spread) killed 2 billion in 2009. Even measures, which, as doctors put it, should be eradicated from the world at this time, is one of the most contagious viruses known to man, however, the public does not take action to prevent it. This is clear through the uproar of the anti-vaccination movement, explored through multiple lenses in this documentary.

The anti-vaccination movement is rooted in the midset of a vaccination being “pure” or “unpure”, as it is a substance that is being put into human bodies. Shown in the documentary, opposers to vaccination–and therefore the 3063 bill that requires all children in a collaborative school environment– view a mandatory vaccine as an attack on their freedom and personal judgment. These opposers even believe vaccines to be dangerous, as some individuals who receive vaccines report other medical troubles. However, correlation does not prove causation. Although many individuals can have adverse reactions after vaccines, relatively few of the very serious cases are actually the result of a vaccine. Here is a run-down of the top anti-vaccination debates:

AUTISM: Autism is a trait that a person is born with, one does not become autistic. The symptoms of autism, as the child is growing, start to become clear between 12 and 24 months, and children get their first MMR vaccine at 12 months.

ALUMINUM: Aluminum can cause swelling and redness of the skin if an individual is allergic to it and can compromise a person’s immune system if the body is highly allergic to it. The amount of aluminum one receives from a whole series of immunizations is less than if you cook an acidic substance like tomato sauce in an aluminum pan.

Measles was eradicated from the US two decades ago, but it is movements like the anti-vaccination movement that allows the disease to live on. The measles disease itself is dangerous, but its lasting effects on the body cause more harm. Measles induces immune amnesia, where a person’s immune system basically “forgets” how to fight off anything else. Children with measles, in particular, are a great concern in the medical community, since they then have a greater risk of dying from all sorts of other things. This brings up the concern of putting children at this risk from a disease that is vaccine-preventable.

One of the more recognizable viruses this year is the coronavirus, which originated from China in bats. This virus is not particularly new (the Sars coronavirus was identified in 2003), but a coronavirus outbreak of this scale has never occurred before. According to the documentary, coronavirus was known to come from bats, especially in China and Egypt, where scientists predict new strands will arise. Scientists had already taken steps to prepare for possible treatments for coronavirus, making the recent patients all the more probable of getting well.

Many are fearing the declaration of a pandemic for the coronavirus. According to the World Health Organization, a pandemic is declared when a new disease for which people do not have immunity spreads around the world beyond expectations. It has nothing to do with the severity of the disease, but its global spread. Currently, the coronavirus is an epidemic, which is a sudden increase in cases of an illness or disease that can be unique to one country or community.

If the WHO decides to declare the virus a pandemic, it would be for the purposes of raising awareness of the severity of the spread, therefore ensuring that treatment centers are aware of the symptoms, treatments, and have the funding to accept patients and take the virus seriously. However, declaring a pandemic might only trigger a global panic, defeating the purpose. To demonstrate the severity of declaring the virus a pandemic, here are some examples of previous pandemics:

Based on the documentary, the CDC takes every possible measure to keep diagnosed patients quarantined and treated without exposing health care workers. Experts say that a vaccine to combat the virus is approximately 18 months away.