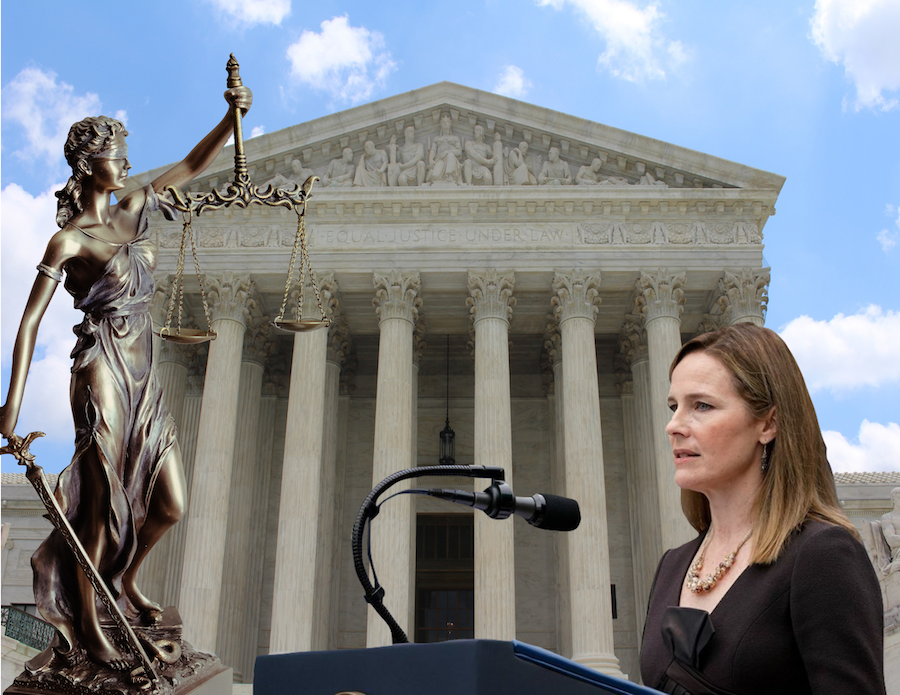 Amy Coney-Barrett, if approved, would be the fifth woman to sit on the U.S Supreme Court. ((Photo Credit: Katia Huddleston/Achona Online/Piktochart))

Amy Coney-Barrett, if approved, would be the fifth woman to sit on the U.S Supreme Court.

Who is Judge Amy Coney Barrett?

Before being appointed to the 7th U.S Circuit Court of Appeals in 2017 by President Trump, Barrett taught at the University of Notre Dame. She’s also a mother of seven children, one of who has down syndrome and two of whom are adopted.

Barrett, if approved by the Senate, would be one of the youngest justices to ever sit on the bench at 48 years-old. She would also make the court have a 6-3 conservative majority.

“I think she’s a great nominee,” says Cassie Hiatt (’22). “She has experience and would be able to serve for a long time.”

Her religion was a topic of concern among Senate Democrats during her 2017 hearing for the 7th Circuit U.S Court of Appeals. California Senator Diane Feinstein said, “The dogma lives loudly within you, and that’s of concern.” Barrett is a practicing Roman Catholic.

Her Catholicism brought up many questions about Roe V. Wade, the court case that argued successfully for the legalization of all abortions.

“How do you evaluate the precedents, plural, with respect to Roe?” said Feinstein.

“Roe has been affirmed many times and survived many challenges in the court,” said Barrett. “It’s clearly binding on all courts of appeals. It’s not open to me or up to me and I would have no interest in, as a court of appeals judge, challenging that precedent.”

Barrett also guaranteed during her hearing that she would “commit, if confirmed, to follow, unflinchingly, all Supreme Court precedent” and that she would “not want to leave the impression that [she] would give some precedents less weight than others because of any kind of academic disagreement with one.”

Three judges on the 7th Circuit Court found a law banning abortions on the basis of sex, race, or a potential disability unconstitutional. Barrett opposed the denial of an en banc rehearing, or, a full bench rehearing of the case.

Republican Senator Charles Grassley then asked her when or if she believed it proper for a judge to put their religion above the application of the law. In response, Barrett said, “Never. It’s never appropriate for a judge to impose that judge’s personal convictions, whether they derive from faith or anywhere else on the law.”

“Because there is a separation of church and state, if she stays true to keeping her personal beliefs away from her duty as a Supreme Court Justice, I don’t have a problem with her religion,” says Elise Warnke (‘22). “So many people in politics are Catholic and have no problem with keeping that separate.”

Barrett is also viewed to be an Originalist in regards to the U.S Constitution, meaning she believes that the document should be followed and interpreted according to its original intent. In a 2013 law-review article, Barrett wrote, “I tend to agree with those who say that a justice’s duty is to the Constitution and that it is thus more legitimate for her to enforce her best understanding of the Constitution rather than a precedent she thinks clearly in conflict with it.”

This follows a similar approach to the late Justice Antonin Scalia, whom Barrett once clerked for. He argued that the Constitution “is not living but dead, or as I prefer to call it, enduring. It means today not what current society, much less the court, thinks it ought to mean, but what it meant when it was adopted.”

Regarding gun laws and restrictions, Barrett is seemingly against strict gun control. “History is consistent with common sense: it demonstrates that legislatures have the power to prohibit dangerous people from possessing guns,” Barrett wrote. “But that power extends only to people who are dangerous.”

Republican Senator Lindsay Graham is hoping to get her approved quickly. “More than half of the Supreme Court justices who have had hearings were done within 16 days or less, so we’ll start on Oct. 12,” said Graham. “We’ll hold it over for a week, and we’ll report her nomination out of the committee on Oct. 22.”

With this timeline, Barrett could be nominated before Election Day (Nov. 3). Only a week after the election, the Supreme Court is scheduled to hear a case regarding the Affordable Care Act, more commonly known as Obamacare. If Barrett is successfully nominated, the Affordable Care Act has the possibility of being overturned which could potentially leave 20 million Americans without health care coverage. Pres. Trump has long since promised to repeal the Affordable Care Act, though he has never produced a legitimate plan to replace it.