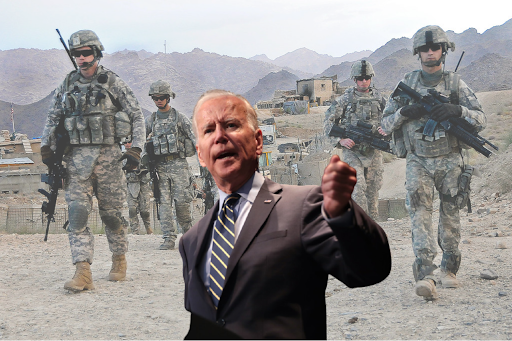 Biden’s plan will end the U.S.’s participation in twenty years of conflict.

President Biden has announced that by September 11, 2021, all American combat troops will be removed from Afghanistan. This symbolic date of the 20th anniversary of the 9/11 terrorist attacks will be the first time in twenty years that there will not be American forces in the country. Biden’s controversial decision has earned praise from some for ending a seemingly unwinnable war, while others have claimed that the choice will have negative ramifications in Afghanistan and at home.

Fifty-nine percent of Americans think that the war in Afghanistan was not worth fighting. The guerilla tactics of insurgents as well as allyship from locals spurred by sentiments of anti-Western influence makes the complete suppression of the Taliban extremely difficult. The U.S. has been proven unable to establish a stable democracy in the country. Additionally, what many view to be the original goal of the war in Afghanistan- to stop the growing power of the Taliban- has been achieved with the death of 9/11 organizer Osama bin Laden, according to President Biden.

English teacher Sara Moses said,  “It is really unbelievable that this war started when I was in high school. We’ve essentially been at war for the majority of my life. We’ve become accustomed to it and we forget that people are over there. The fact that there’s an attempt to bring everybody back from this war is a pretty lofty goal, but I think that it would have a positive impact on everyone that has been directly impacted by the war.”

Biden called the conflict in Afghanistan the ‘forever war.’ But this war is not linear. It is cyclic. It is forever going in circles. It ends where it began and the cycle repeats itself, over and over again. It is madness.

The length of the war has spanned four presidencies. While working with the Obama administration, Biden repeatedly advocated for an end to the war to no avail. Former President Donald Trump negotiated with the Taliban to begin troop withdrawal by May 1 of this year. NATO has backed the president’s decision by planning to withdraw troops, but pledging aid and advice to Afghanistan’s government.

However, Biden’s decision has not been without contention. The president of Afghanistan, Ashraf Ghani, reportedly disagreed with the removal of U.S. troops behind closed doors. President Ghani believes that the Taliban will be emboldened by the decision, and that this could have catastrophic consequences for his office and the country as a whole. Over 18,000 Afghanis who have cooperated with the U.S. may be targeted by terrorist organizations as they await the lengthy vetting process for a U.S. visa.

Linnea Nestor (‘23) said, “I think that we should keep troops in Afghanistan because radical groups are very much still a threat there. We don’t want more terrorist groups such as the Taliban to form.”

In addition to outcry in Afghanistan, Biden has received criticism at home for his plan. Over 2,300 American soldiers have died in the war. Without any concrete results from the U.S.’s efforts, some feel that these deaths were meaningless. While President Biden saw the goal of the war as stopping any threat of future terrorist attacks on the U.S., others see the goal as establishing a stable, democratic government in Afghanistan and completely eradicating any radical factions. From one view, the war is won, and from the other, it is far from over.

Al Qaeda’s recent announcement of deep ties to the Taliban in Afghanistan and Pakistan should come as no surprise.

The Obama/Biden blunder in Iraq is playing out in real time in Afghanistan with even deadlier consequences on the horizon. https://t.co/8PnzvxlCKU

The withdrawal of troops from Afghanistan has marked a turning point in U.S. foreign policy. Instead of focusing on counterrorism, Biden has expressed his interest in competing with China. The U.S. has spent over $2 trillion on Afghanistan since 2001. These funds could be invested in improving infrastructure and constructing 5G communication networks- two ambitious campaign promises from Biden that could potentially give America a head start in the economic race with China.

Aspen Hunter (‘23) said, “…Perhaps having less involvement [in Afghanistan] will provide more capacity for extra action to be taken on problems at home, such as the border crisis. However, foreign policy and military activity are always significant parts of the President’s job, and I think that in some ways this is a domestic issue because it involves American citizens fighting overseas.”

The plan to withdraw troops marks the end of twenty years of conflict between the U.S. and Afghanistan. However, Afghanistan’s national stability is at risk as terrorist groups face less opposition. This decision will undoubtedly be a defining moment for the Biden administration, regardless of the outcome.