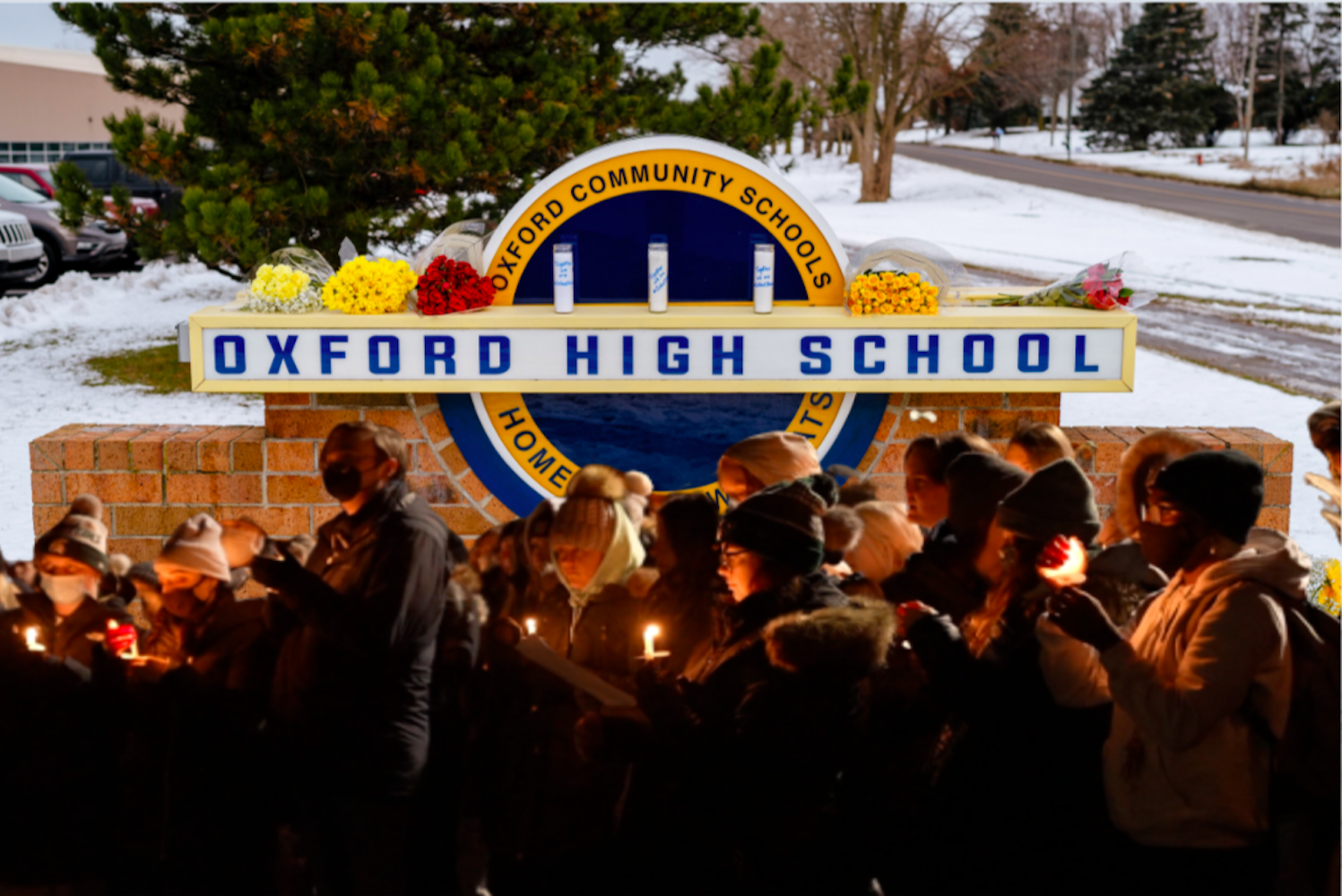 Ethan Crumbley, the alleged active shooter has been charged with terrorism for the trauma he inflicted upon the school community, among other charges. (Photo Credit: Elise Favret/Piktochart/Achona Online)

Ethan Crumbley, the alleged active shooter has been charged with terrorism for the trauma he inflicted upon the school community, among other charges.

On Tuesday, November 30, 2021, an active shooter attacked Oxford High School in Michigan, killing four, and injuring seven. The alleged perpetrator, Ethan Crumbley, was a 15-year-old student at Oxford whom school officials had raised numerous concerns about mere hours before the act.

Prior to the day of the attack, Crumbley posted multiple threats of violence via his social media account that, while putting the school community on edge, remained unsubstantiated. The school released multiple schoolwide responses regarding the onslaught of threats just weeks before the November 30th events.

The day before the attack, Crumbley’s social media accounts were full of threatening posts, including images of the gun he allegedly used the following day. One post read, “Now I become death – destroyer of worlds – see you tomorrow Oxford.” Also on that Monday, a teacher witnessed Crumbley shopping for ammunition online and brought up their concern to both school officials and Crumbley’s parents.

When alerted, his parents had a meeting with the school who expressed concern, however, they did not share the sentiment. Crumbley’s mother, Jennifer Crumbley, allegedly texted him, “LOL I’m not mad at you, you have to learn to not get caught.”

On Tuesday, the day of the shooting, Crumbley’s parents met with school officials a second time after more concerns were brought up by a second teacher. The teacher had found a note on his desk with a drawing of a handgun, a laughing emoji, and a body that appeared to have been shot, that read: “Blood Everywhere” and “The thoughts won’t stop me, help me.” In the meeting, Mr. and Mrs. Crumbley insisted their son return to class, and because he had no prior infractions on his record, he did. Three hours later he allegedly committed the massacre.

“I heard about Tate Myer, the student and varsity football player who sacrificed himself to protect his classmates. While he is a hero, it’s not his, nor any child’s responsibility to have to make that decision. That’s a decision that shouldn’t have to be made in the first place.” said Maggie Smith (’23).

When they heard reports of an active shooter, both Mr. and Mrs. Crumbley assumed their son was the perpetrator. Mrs. Crumbley allegedly texted: “Ethan, don’t do it.” furthering the idea that the mother knew of the probability of her son’s possible connection to the horrendous actions. Mr. Crumbley called 911 to both report a gun missing and tell them that he believed his son to be the shooter, officials said.

The gun, posted on his social media the night prior, and used in the attack was a “Christmas present,” bought for him by his father just four days prior on Black Friday, November 26, 2021. An investigation revealed the gun, a 9 mm Sig Sauer SP2022 pistol, was stored in an unlocked drawer in the Crumbley parent’s bedroom, Oakland County Prosecutor Karen McDonald said, (see the full video below). In Michigan, it is unlawful for any individual under the age of 18 to possess a handgun, or for any handguns to be loaned or borrowed.

Ethan Crumbley was taken into custody soon after the attack and was charged with one count of terrorism causing death, four counts of first-degree murder, seven counts of assault with intent to murder, and 12 counts of possession of a firearm in the commission of a felony.

The terrorism charge, unusual in the case of school shootings could set a precedent for the future. In Michigan, an act of terrorism is considered “a willful and deliberate act” that would be a felony, is a danger to human life, and “is intended to intimidate or coerce a civilian population or unit of government”.  Crumbley’s apparent premeditated act is considered by Prosecutor McDonald to meet this definition.

When asked of this decision, McDonald said, “We also need to respect the hundreds of students that were in that school that day, running for their lives out of the building, hiding underneath desks, in bathroom stalls, and sending messages. I’ve had an opportunity to look at some of the messages… those kids were sending their parents, and I can’t even imagine what that must have been like. Receiving a text that your teenager is saying ‘I love you so much, I think I’m going to be killed.’ What charge addresses that? And the answer is the terrorism charge. I think it’s appropriate.”

“I think a terrorism charge is definitely warranted just because that school community will be traumatized for years to come. He needs to be held responsible for the pain he caused, whether it’s physical or not,” said Alexandra Pramberger (’22).

McDonald also explained that school officials at Oxford High School had legal grounds to search Crumbley’s backpack and locker, but failed to do so on the day of the shooting. Considering Crumbley’s alleged attack occurred mere hours after the meeting with both his parents and the school officials, it is presumed the gun was either on his person or in his locker concurrently.

In tandem with the charges against Ethan Crumbley, further charges have also been made against his parents. Both Jennifer and James Crumbley are being charged with four counts of involuntary manslaughter for their neglect in preventing the atrocity.

In Michigan, involuntary manslaughter is defined as the act of causing the death of a human being as a result of carelessness or reckless actions, despite no intention of killing another. This charge, placed in four counts against each parent, may also serve as a precedent for similar situations in the future. Many pro-gun-control groups welcomed the charges as they believed the parents to be criminally negligent, and in that regard should be held liable. The prosecutors allege that not only should the parents be charged for their apparent failure to properly store their gun, and notice concerning warning signs in their son’s actions, but for giving what appeared to be “unrestricted access” to the firearm.

When asked about the involuntary manslaughter charges, McDonald said, “we have to start addressing how somebody like (Ethan Crumbley) can so easily get their hands on a weapon and we have to hold the people responsible who allowed that to happen.”

“I think the parents are partially at fault because they were called in about his erratic behavior and they didn’t take him home or perform any preventative measures,” said senior Elizabeth Menendez.

The parents were charged, and due at an arraignment on Friday, Dec. 3, however, they did not attend. An arraignment is a formal reading of all the charges against a defendant. The US Marshall Service, as well as local Michigan law enforcement, searched for the pair all of Friday afternoon, before finally locating them in a nearby Detroit art studio early Saturday morning. The owner of the art studio, while claiming to have been unaware of their warrants and location inside his studio, was thoroughly questioned. No charges were filed on him to date, although they remain a possibility.

The US Marshals have adopted the case of the search for James and Jennifer Crumbley, the parents of the accused Oxford HS (Mich.) shooter. The USMS Detroit Fugitive Apprehension team is working in conjunction with the Oakland County Sheriff’s Office on the search.

When asked about the ramifications of the parent’s apparent attempts at evading authorities, Michigan Attorney General Dana Nessel explained, “If they are convicted, there are actually additional points that are scored for the obstruction of justice…They’re likely to get higher sentences and more time in the event they’re convicted because of this.”

All three Crumbleys are currently being held in Oakland County Jail, while unable to communicate with one another, and have pleaded not guilty.

Charging the school officials who may not have done enough to prevent the attack, as well as the art studio owner who may have aided the Crumbley’s evasion of the authorities, “remains an option,” according to McDonald. Students and families, angered by the lack of charges to date have begun to file suits against the school board.

Survivors of the mass shooting at Oxford High School are filing two $100 million lawsuits against the school district and employees https://t.co/nAj1sm5MO3

While a horrific event, this prosecution of those involved to the fullest extent of the law may serve as an example to other states, schools, and even parents in promoting better gun safety and school regulations to prevent future tragedies.