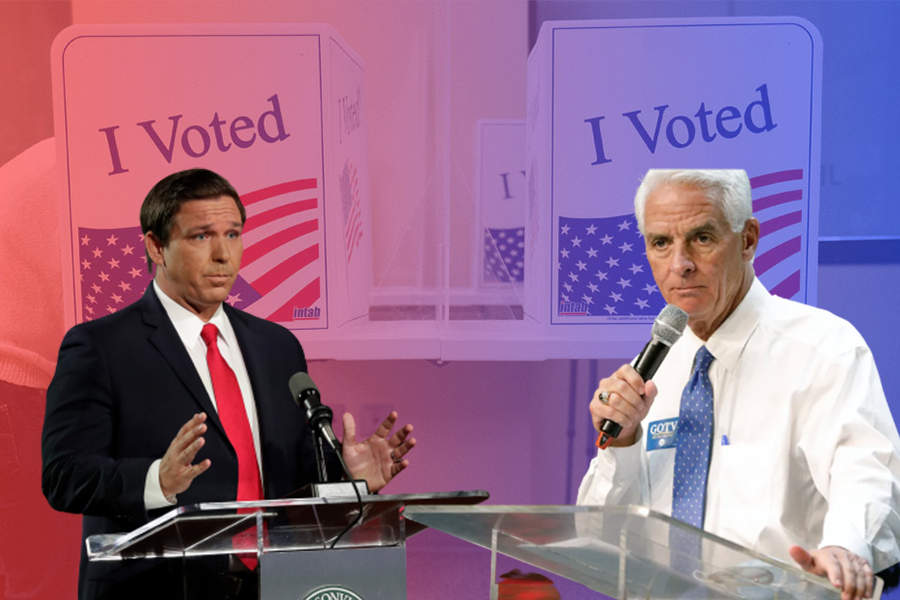 Current governor Ron DeSantis and former governor Charlie Crist are set to face one another in the general election, after they each won their primary elections.

On August 23, Florida held its primary election, determining the ballot for the November 2022 general election. The ballot included nominees for nine House seats, one Senate seat, State Attorney General, and, most notably, Governor. The race received national attention, as the general election is set to give large indicators of Florida’s future, as well as its status as a swing state.

229,064 ballots were cast in total. Of those, the majority were registered Democrats, who made up 45.75% of total voters. Florida holds closed primaries, meaning people can only vote in the primaries of parties they are officially registered with. Of eligible voters, 30.8% of Democrats, 32.6% of Republicans, and 11.1% of nonpartisan voters participated in the election.

“The very important thing about primaries is that turnout is always really low, and so if you want your voice to be heard, it’s a great opportunity because many of these races are decided by a few hundred or a few thousand votes. Additionally, if you are not happy with the candidates who are running in November, the primary election is your chance to decide who those candidates are going to be,” said AP Government & Politics teacher Stacy Filocco.

Soon you will start seeing this statewide….

Governor @RonDeSantisFL delivers results for the people of Florida.

From parents to small business owners, waitresses to nurses, sheriffs to teachers…

Floridians are grateful for the Governor’s leadership. pic.twitter.com/HxgovXgIPc

Much more national focus was placed on the democratic race. Rebekah Jones, LaShonda Holloway, Karen Green, Maxwell Frost, Shante Munns, Eric Lynn, Alan Cohn, Jaren Moskowtiz, and Annette Taddeo received the nominations for the House. Aramis Ayala and Val Demings are set to face the incumbents for State Attorney General and the Senate, respectively. Receiving the most notice, however, was the gubernatorial race, with Charlie Crist coming out victorious.

“My birthday was on primary day, so I was extremely excited to vote. I think it is really important to have an understanding of how our government works as well as who runs it. Further, I believe in the value of being an active participant in our democracy, as we can have a lot of influence on who makes our laws,” said Aspen Hunter (’23).

Crist faced off against Commissioner of Agriculture Nikki Fried. Of the two, Crist was the more moderate, and more experienced, candidate. In fact, he has already served as Florida’s governor from 2007 to 2011, although he was elected then as a Republican. He publicly switched to the Democratic party shortly after ending his governorship in 2012, and went on to serve in other positions, including as the representative for the US House District 13. He served in this position until shortly after the primary on August 31, when he resigned to focus his attention on the gubernatorial race.

The race between Fried and Crist served as an indicator on where Floridians fall on the national divide within the Democratic party. Fried represented the more progressive, and often younger, side of the party. Part of her platform included a focus on public education, gun reform, expanding Medicaid, expanding voting rights, and the legalization of marijuana. She was also quite vocal in her support of LGBTQ rights, stating she would appoint a statewide LGBTQ liasion to the governor, expand Medicaid to cover transgender health, and enacting foster care non-discrimination. She also stood out for her support of abortion rights, particularly after she declared herself the only truly pro-choice candidate, pointing to Crist’s appointment of two conservative Florida Supreme Court justices while he was governor.

After the Supreme Court’s overturning of Roe v. Wade, abortion rights became a large talking point within the election. In response to Fried’s criticism, Crist affirmed his current stance on abortion, stating he would work to make it fully legal in Florida from the first day of his governorship. DeSantis, on the other hand, has firmly aligned himself with anti-abortion views, as when in April he signed a law prohibiting abortions in Florida after 15 weeks of pregnancy. He has also stated he wishes to expand pro-life protections, although he has been tentative to do so. The debate on abortion extended beyond the gubernatorial race, with House and Senate candidates also making their stance on abortion key parts of their platforms.

The race for governor received a large amount of national attention because the general election is set to mark an important point in Florida politics. While Florida has previously always been regarded as a swing state, the state’s policies have been moving further right in recent years, particularly under Governor DeSantis. These policies also mark a change in Florida’s overall voter makeup, as for the first time in modern history, the state has more registered Republicans than registered Democrats.

While DeSantis has amassed a large following as a prominent figure in Florida politics and the GOP now, it was not always this way. The last three gubernatorial races were decided by 1 percentage point or less, including that of the current governor. It was only once he took office that he gained national attention for his “anti-woke,” policies, such as his recent implementations into education. While it seems this would paint him as the obvious frontrunner of the race, recent polls have shown him and Crist to have equal footing. The race is set to be a competitive one.

BREAKING NEWS: A bombshell new poll of Florida voters finds that Republican Governor Ron DeSantis is statistically TIED with his Democratic challenger Charlie Crist. RT THIS IF YOU HOPE THAT CRIST SENDS DESANTIS PACKING IN NOVEMBER!

It is also set to be an expensive race. It has already racked up large expenses and spending is likely to increase dramatically as November approaches. Crist has spent $14 million during the election cycle, almost doubling the amount spent by opponent Fried. DeSantis, however, has topped that, raising more than $165 million during his time in office, putting him on track to break the record for most money ever raised by a candidate for governor, another testament to his popularity.

While the most prominent aspect of the election, the primary has received attention for reasons beyond the gubernatorial race as well. Matt Gaetz, who was closely tied to former president Donald Trump, won his race for the District One House seat, and is heavily favored to win a fourth term. This has caused some backlash, as Gaetz is currently under federal investigation for alleged involvement in a sex trafficking case.

The general election also has a chance to make history in Florida with Senate candidate Val Demings. If she were to win the seat, Demings would be Florida’s first Black female senator. After winning the Democratic primary by a large margin, she is set to face incumbent Marco Rubio in November.

While many eligible voters missed out on the primary election, there is still opportunity  to participate in the November 8 general election. The deadline to register is October 11. Early voting will take place from October 24 to November 6, and mail-in ballots must be received by November 8 at 7:00 pm. Election day voting is on November 8 from 7:00 am to 7:00 pm, and voting must happen in the polling place assigned to each precinct.

“I was not of age to vote in the primary, but I do plan on voting in the general election in November. I think voting is important because it’s our responsibility as citizens to participate in electing candidates that have our best interests in mind. Voting is the only way we can change any policies or laws affecting us or that we don’t agree with,” said Ximena Sanchez (’23).