The Problem With #GIRLBOSS Feminism (OPINION) 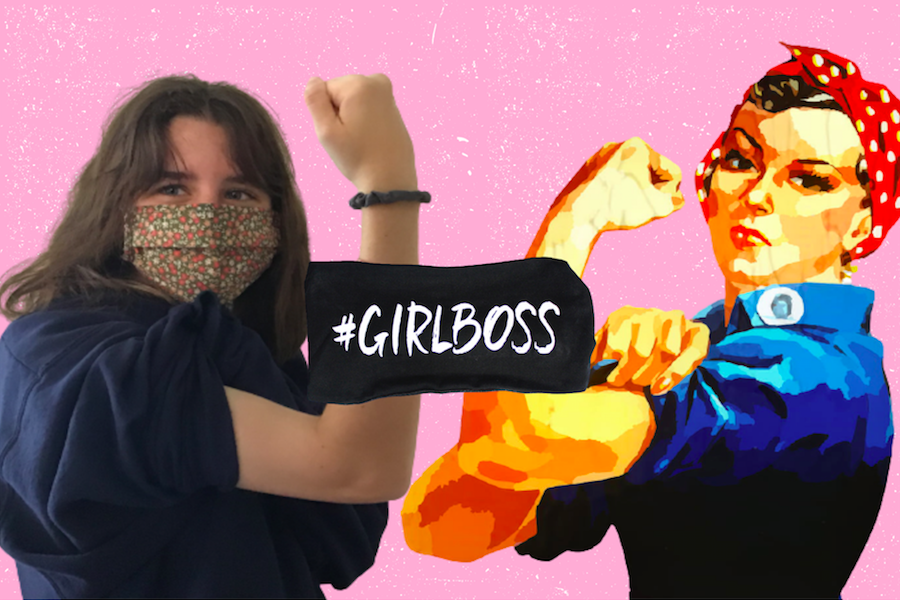 The image featured includes Kate Lambert ('22) and the infamous 'Rosie the Riveter' poster created during WW2 to boost morale.

Women have endured a long list of hardships throughout history that persist today in daily struggles. While it is vital that women should be treated equally and with respect, is having a female CEO the hallmark of progression, or are we maintaining the status quo?

Having a girlboss feminism mindset has good intentions, but fails to acknowledge that being a successful female millionaire does not support or represent all women. Feminism should be empowering and supporting the liberation of all women from various backgrounds, not equating money, power, and the status quo as progression.

"The rise and fall of the girlboss says more about how comfortable we’ve become mixing capitalism with social justice, as we look to corporations to implement social changes because we’ve lost faith in our public institutions to do so." 🔥 @rhymeswithbee https://t.co/VNJU1Ar5Fs

To live in a society where having a girlboss as a symbol of womanhood, rather a reflection of one individual who chose to be a successful driven person, is a dangerous mix. It is important for women to be motivated, but we should still show respect and admiration for women who do not choose or have the opportunities to advance that far in life, like a waitress or cashier.

If respect becomes a norm to only be given to those with advanced education or a higher occupation, it is utterly meaningless to call this feminism because all women need to be empowered regardless of the job they pursue. When feminism is only catered to one direct audience, the patriarchy is still prominent. This can range from being a stay at home mom or a babysitter, no matter how difficult the career women should be given the same respect and dignity they deserve.

Catie Berg (‘22) said, “My mom is a doctor and when I say that to other people they look at me with more reverence. It’s obvious the word ‘doctor’ means something to people but when they look at me like I have a gold crown on my head it makes me disappointed. If I switched out the word doctor with ‘plumber,’ I would be looked at differently. It’s not feminism, it’s respectability politics.”

The lines are blurred when placing women in positions of power is seen as an accomplishment, when in actuality it is another way of virtue signaling and shifting the actual issues out of the picture. Just because the chief operating officer (COO) of Facebook is a woman does not mean that their website and platform poses any less of a threat to the general public with its mental health affects and addictive traits (likes, comments, follows, etc.)

Emmie Drell (’22) said, “I come from a white middle class background with lots of opportunities given and handed to me. I know the world is sexist and I have definitely experienced it, I’ve always felt annoying when saying that being successful doesn’t mean you should get more respect because it sounds like I’m giving excuses. I’m not trying to. It’s just when I’m told a story about girls owning companies and factories it doesn’t make me feel empowered it makes me feel sad because the only way women are being seen as powerful is if they have cash. I want to be respected for being a human not for how much I can produce and profit from.”

Having women as the forefront of companies to let people believe that there are harmless implications in what media they consume is another way of viewing women as symbols and objects rather than as complex and sometimes controversial people. Empowered females are still accountable for the serious problems they can impose, an example being RBG co-signing a 600 mile pipeline for natural gas under the Appalachian trail, a serious threat to Indigenous women because of sexual violence being so rampant. RBG was a serious stepping stone for women being in our government, but it is important to acknowledge that she did not advocate for all women.

Another noticeable trait to girlboss feminism is that it doesn’t always acknowledge that successful American female CEOs and business women are white women, typically composed of an upper middle class upbringing with lots of financial support.

Sophia Torres (‘22) said, “From a family of immigrants, we have gotten through various trials and roadblocks in the way, and have gone through so much, but that doesn’t mean my perfect life in America is as easy as I’m saying it is. I still face restrictions in how I want to pursue my life and I am so grateful for the financial freedom I have compared to other people, because if we’re going to be realistic it does take money to get symbols of intelligence like college.”

By writing this, I am not trying to give the green-light to give up any chances and sulk in systemic problems, I am trying to convey that modern feminism shouldn’t be measured with academics and power. Having a female figurehead does not solve sexism but enables classism by equating that being rich is easy and being poor means you aren’t trying hard enough. Feminism being emptied out to only success stories makes the ideals of it hollow and one dimensional.