Music Elitism: Beauty is in the Eye of the Beholder (OPINION) 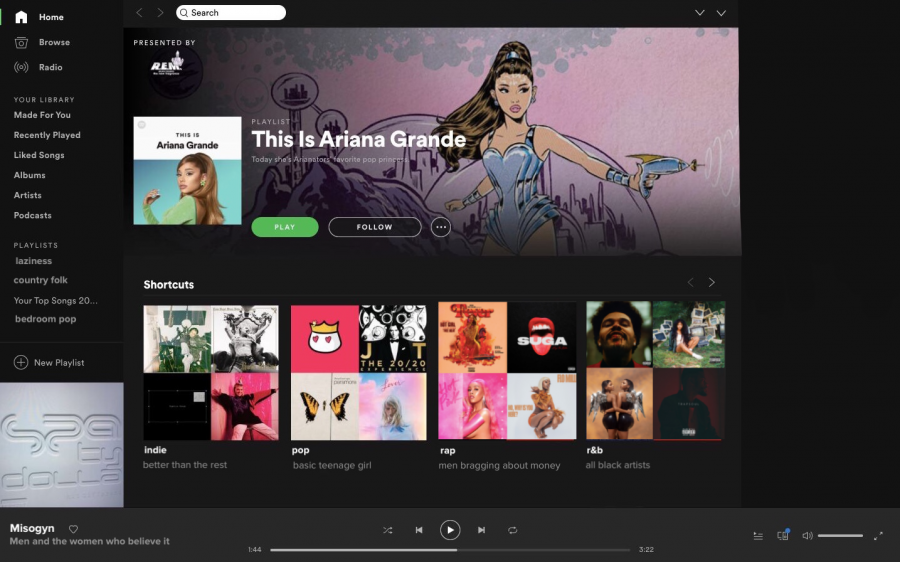 The release of Spotify Wrapped sparked conversations of music and the stigmas around each genre.

Spotify Wrapped, a recap of each individual user’s listening habits for the year, was released on Dec. 2 and sparked many conversations about artists, the people who listen to them, and the best kinds of music. These conversations truly emphasized the stigmas around different kinds of music and inadvertently revealed the superiority complex of many music listeners.

As conversations about music progresses, so does the stigmas surrounding each genre. It’s important to understand that each genre does not appeal to every person, as that isn’t something they are meant to do. The saying, “beauty is in the eye of the beholder,” encompasses this and can be applies to music. The lack of understanding of this fact causes many people to have a judgmental attitude towards entire genres of music.

Fans of indie music tend to be the most critical of other music genres without finding fault within their own genre. The “culture” surrounding indie music is one that favors individuality, and being “not like other girls.” Many like to believe they are different because they liked an artist before they were mainstream. While this may not be your personal view or attitude, this is where most of the judgement comes from. This extreme desire to be different from the crowd leads to harsher criticisms of other mainstream genres.

“Not to say that pop music is bad, because it’s not, but most people tend not to widen their taste because the popularity of pop allows them to fit in,” said Natalia Guzman (‘23).

There is a certain stigma around pop music that is completely unreasonable. Many critics of this genre like to condemn pop artists for having the same sound to their music. While this is true, it is not a critique used against most other genres. Pop is also known for being the genre for teenage girls, whom society has deemed incapable of enjoying anything of quality. This means that if a teenage girl likes something like pop music, boy bands, Starbucks, or anything mainstream,  it must be bad. This is the stigma indie fans try and pry themselves away from. The fear of being considered basic and allowing the prior mentioned stereotype to apply to them causes many alternative music fans to submit to the same oppressive stereotype in the process.

Country music, a very popular genre but one that receives widespread hate across social media, is a special case. Many characteristics due to the stray from its origin cause people to dislike country music. Country has evolved from the anti-capitalist genre of the working class to a pro-America, Christian, and all around the opposite of the original genre. Many country songs tend to objectify women, which men like to write off as being realistic representations of relationships. Country music that is still true to its roots still exists, but the spotlight remains on more mainstream country music. Despite all of these changes, it is still not okay to judge anyone who enjoys country music.

Rap and R&B are also heavily judged genres, as they are dominated by Black creatives, which means that most criticisms rely heavily on racist stereotypes. While misogyny towards women in the rap industry is a conversation as old as time, rap as a whole is regarded as just men talking about money and women. This is deemed lazy and tossed aside. R&B is a genre that has been manipulated to cram all Black artists into a box, without allowing them to venture out.

This is evident through what the powerful people of the music industry have been doing, such as the Grammy’s creating an “Urban Contemporary” award. When an artist ventures into Rap or R&B, their work tends to be frowned upon no matter the quality. A great example is Ariana Grande’s latest album “Positions,” which has been poorly received because of how it strays from her normal pop rhythms. Even in fan rankings, Grande’s R&B songs tend to be lower on their lists.

And this is ALL my argument is trying to say, but it’s deeper. Since she used R&B, her project is being considered lowclass, lazy, lacking of concept. The same criticisms Black artists mainly receive for dropping similar projects. https://t.co/orPlHsR4iZ

Additionally, the lines between each genre has been blurred with the creation of new categories such as “bedroom pop” which describes music that still fits the criteria of pop but has a more quiet and soothing sound.

As the distinction between genres diminishes it becomes increasingly difficult to dislike a genre. There was already the possibility of liking at least one song out of an entire genre, but now that the divisions have lessened there is a good chance that your favorite and least favorite genres will collide. With artists such as Lil Nas X creating music that combines genres, in his case rap and country, this possibility has become more likely.

The phrase “art is subjective” is thrown around anytime people differ in opinions over every medium besides music. However, this applies to music as well; while the explanation behind one’s disdain might stem from something problematic, that is not always the case, and disdain for a certain artist or genre shouldn’t translate to hatred for fans of the music.

“Each genre of music can appeal to lots of different people. Personally, I’m not a big fan of today’s radio music because I think it’s too basic, but honestly as long as the person who does listen to it enjoys it, that’s good for me. The idea that if you listen to rock and alternative you must be emo and if you listen to country you have to be from a rural place, is just wrong. People can enjoy all genres of music no matter who they are or what other people think. If they enjoy that genre let them enjoy it, it’s their choice. You enjoy your music, I’ll enjoy mine,” said Grace Cronen (‘21).