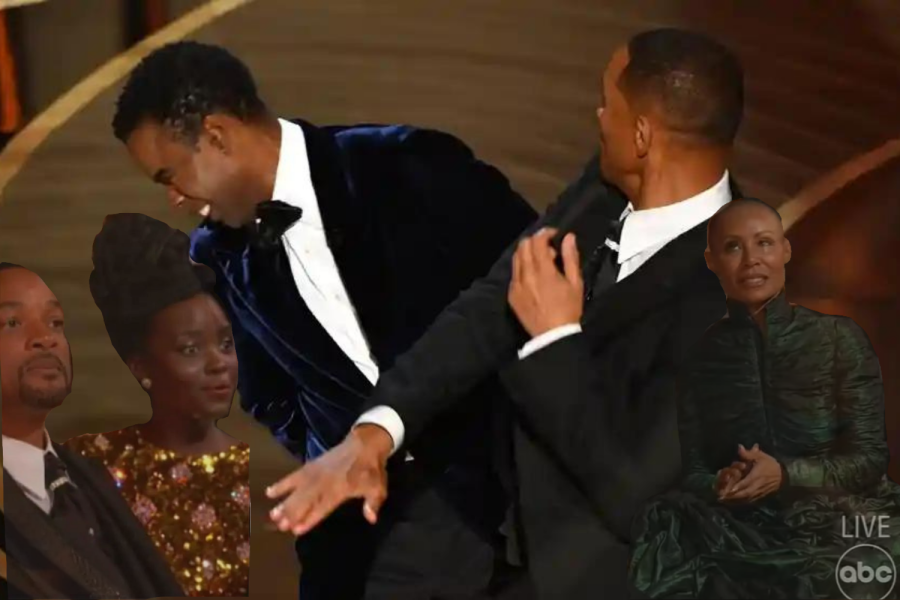 Will Smith slapped Chris Rock on the Oscars stage, and arguments and varied opinions have ensued.

The Academy Awards, more commonly known as the Oscars, had their 94th awards ceremony on March 27, 2022. The Oscars had reached an all time low viewership in 2021, with 10.4 million viewers tuning in. However, this year, viewership soared to 16.6 million. This was most likely due to the drama that ensued between Chris Rock and Will Smith.

The incident started after Chris Rock made a joke about Jada Smith saying, “Jada, I love you. G.I. Jane 2, can’t wait to see it, alright?” The audience and Rock awkwardly laughed at the cheesy awards show style joke. Jada, however, was not laughing. She was diagnosed with alopecia in 2018, which caused her to go bald, and eventually shave her head. She was obviously bothered by Rock’s comparison. After a short moment, Will Smith was shown walking down the stage towards Rock. Smith quickly slapped Rock and returned to his seat. This moment immediately began to trend as viewers discussed the dramatic twist of the night.

Despite a slew of historic wins, Will Smith’s slap heard round the world remains the most talked-about moment from the #Oscars, which topped this week’s Variety’s Trending TV Charts, presented by @DIRECTV. See what else made waves this week: https://t.co/i4DPonjf9c pic.twitter.com/sUmMRgzW87

Arguments ensued discussing which person was in the wrong. Rock’s joke was insensitive to Jada’s struggle with alopecia. It is not clear whether Rock knew about Jada’s illness and knew that she might take offense to the joke. However, Smith and Rock were close friends, and it is entirely possible that Rock knew. Rock still hasn’t made an official statement about the issue.

Meagan Vericker (‘24) said, “I feel that the slap at the Oscars was deserved, however there could have been a better way to deal with it. Having a medical condition that makes you look different can be rough, and it doesn’t help when people make comments. I think they are both in the wrong, however Chris Rock was worse because people don’t understand how hurtful comments like those are until it happens to them.”

Smith’s antagonization of Rock was understandable as Rock offended his wife. However, slapping Rock was an extreme reaction. Assaulting a fellow actor on the stage of the Oscars is not an acceptable reaction. Telling Rock privately that the joke was upsetting would have been a reasonable action to take. Even if Rock’s joke was insensitive, violence is never the answer, especially not in front of millions of people.

Chris Rock just addressed the Will Smith #Oscars slap for the first time during a sold-out stand-up show in Boston. https://t.co/Keka0MVhSd

Listen to the audio 👇 pic.twitter.com/TuqE8AHs6C

The reasons for Smith’s violent reaction can be speculated. One main reason could be toxic masculinity. Smith initially laughed at Rock’s joke before the camera cut away. Smith may have noticed Jada’s negative reaction and become angry. No matter what the cause, Smith tried to justify his attack as “defending his family.” He compared himself to Richard, the father of Venus and Serena Williams, who he portrayed in King Richard, for which he won the award “Best Actor.” Smith’s belief that protecting his family is equivalent to slapping one of his friends shows strong signs of toxic masculinity. Smith apologized to the Academy during his acceptance speech but did not apologize to Rock. Smith’s publicist came out with a statement almost a week after the incident.

“Will Smith slapping Chris Rock was definitely shocking and violent. It’s crazy to see something like that at an award show like the Oscars,” said Kathryn Burke (’24).

Reactions from the public have differed. Many viewers believe that the incident was staged. This does not seem to be true as both Rock and Smith cursed on national television. American broadcasts also muted the audio after the slap. Other viewers sympathize with Rock and argue that Smith should be charged for assault. While Smith did assault Rock, pressing charges is an extreme reaction. Smith and Rock are friends and pressing charges for a slap is very dramatic.

I support Will Smith. Making offensive jokes about a mans’ wife is unacceptable. God bless you Will.

A multitude of celebrities have shared their opinions on who was right or wrong in the situation. Zoe Kravitz shared her opinion in an Instagram post, captioning it “here’s a picture of my dress at the awards show where we are apparently assaulting people on stage now.”

Many celebrities shared similar opinions, while others applauded Smith for standing up for his wife. However, the amount of opinions and comments have become exhausting. On Good Morning Britain, Daniel Radcliffe said, “I’m just so already dramatically bored of hearing people’s opinions about it that I just don’t want to be another opinion adding to it.”