Catholic Churches and Statues are Being Destroyed 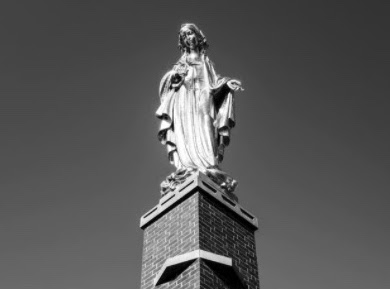 “The secular iconoclasm of the current moment will not bring reconciliation, peace, and healing. Such violence will only perpetuate the prejudice and hatred it ostensibly seeks to end...Only the love of Christ can heal a wounded heart, not a vandalized piece of metal,” said Bishop Donald Hying of Madison, WI of the destruction of religious statues across the US.

My family has pictures of my ancestors that we pull out of a bookshelf from time to time, and my grandparents tell stories about the past. I hear stories of Bl. Philip Rinaldi, my great-great-great-great-great uncle, who is on the way to sainthood. We see paintings and statues of him, which makes the stories more real in a way and gives us a sense of family pride. I hear of the saintly Fr. Peter Rinaldi, my great-great uncle, and his siblings. I read the books he’s written, I see the statues that he brought to churches here in America from Italy. I hear the stories of how he woke up at four every morning to write his books so he could still actively be one of the top experts on the Shroud of Turin and be fully present to his parishioners. In a way, the family stories remind me of our faith: we look at pictures and statues of Jesus, Mary, and the Saints to better understand their stories. The images and statues also help us better comprehend that we are actually talking to them when we are praying. My favorite images of Jesus are images of the Sacred Heart and the Divine Mercy Image, and my favorite title for Mary is Mary, Help of Christians. This is why it breaks my heart that Catholic statues have been taking the heat because some are angry that Jesus and Mary are white in many images and statues, and some statues and churches are being demolished because of being accused of being racists.

Catholics are not being racist or white supremacist by having statues of Jesus and Mary that are white. There are many statues and images of them in all races because they are supposed to look like the believer. Paragraph 1149 in the Catechism of the Catholic Church says, “the liturgy of the Church presupposes, integrates and sanctifies elements from creation and human culture, conferring on them the dignity of signs of grace, of the new creation in Jesus Christ.” So, those who are destroying our images, statues, and churches need to stop. “It is heartbreaking to see these beautiful sculptures wrecked because they are symbols of Christ and the communion of saints, with whom we share in Christ’s body of faithful. They remind us of our call to holiness and live the Gospel,”  said Sr. Lisa Perkowski.

Many churches have been and are still being demolished, many times with faithful believers inside. It is heartbreaking to think that people in this world want to destroy places of worship.We believe in the Real Presence of Jesus in the Eucharist, and Jesus is in the tabernacles of these churches that are being vandalized. Fr. Leo Patalinghug, a Catholic priest who is also a TV host and an award-winning chef, said, “Our defense of faith to some degree requires defending church property as patrimony. But we don’t respond to evil, ignorance, and immaturity with violence, but with virtue.”

Statues of St. Junipero Serra have been torn down and demolished. “St. Junípero has long been misunderstood and, in my opinion, wrongly used as a symbol for the tragic abuses committed against California’s first peoples,” said Los Angeles Archbishop José Gómez. Contrary to the racism towards Native Americans he was accused of, “while the Spanish military wanted to arrest the natives and execute them, Father Junipero Serra repeatedly wrote to urge them to spare the accused. Father Serra, a Franciscan missionary, helped found many of the Californian missions that went on to become the centers of major cities. The California natives who joined the missions learned the faith, as well as the technologies and learning of Europe,” said the Catholic News Agency.

St. Louis statues are also being wrongly torn down. The Catholic Telegraph wrote about “St. Louis’ care and concern for his subjects, especially the poor— pointing to reforms that he implemented in French government, which focused on impartial justice, protecting the rights of his subjects, steep penalties for royal officials abusing power, and a series of initiatives to help the poor.”

Archbishop Robert Carlson said the statue of St. Louis, with its sword held down rather than poised for attack, is the peaceful symbol that the city of St. Louis needs.

The mainstream media is not saying much about this, which is especially frustrating. Our statues and churches are being vandalized, sometimes burnt with people inside, and the media is turning a blind eye to it. “Modern man has so long preached a doctrine of false tolerance; he has so long believed that right and wrong were only differences in a point of view, that now when evil works itself out in practice he is paralyzed to do anything against it,” said Ven. Fulton J. Sheen. The media believes that this destruction is just “differences in a point of view,” and they aren’t speaking about it even though it is not okay and will never be.

Connor Kirchner, a rising sophomore at Jesuit, said, “Catholic statues are the recent target of the BLM protests. The statue of King Louis IX was a recent example of the BLM protests attack on Catholicism. Peace protestors, priests, and bystanders peacefully prayed the rosary near the statue in order for protesters to not tear it down. Unfortunately, this eventually turned bad and led to the BLM protesters brutally attacking peaceful Catholics praying the rosary. Catholic statues should not be targeted by the BLM movement. Shaun King, a BLM activist, has called for the destruction of all statues, stained glass, along with other religious symbols of ‘Jesus and his European mother’, also known as Mary. It is wrong to tear down symbols of Catholicism because statues help people focus on prayer or worship.”

I do believe that Black lives matter. All people are created in the image of God, and should be treated as such. I just do not support the organization because I believe that Black unborn lives matter, we need the nuclear family, and obviously that our churches should not be vandalized. There is one thing these people do not realize: even though they burn down our churches and vandalize our statues, we still love them and are definitely praying for them. This heartbreak and anger that we have as Catholics does not bring hatred, as we still have to love them anyway.

“Statues also give us a better understanding of each saint by how they are depicted. I remember going to mass at the Basilica of the National Shrine of the Immaculate Conception for the Mass before the Pro-Life March. I remember looking up and seeing a huge mural of Jesus in one of the domes. I didn’t see a ‘White supremacist’, I saw our Lord Jesus Christ, who is our savior,” Kirchner said.

Even though these violent actions are wrong, We can not respond the same way – with violence. We have to respond virtuously and peacefully, with much prayer. Sr. Mary Glavin said, “I do believe the perpetrators need our prayers as they must be unable to embrace the love God bestows on them. Let’s be sure our Academy Community can help them with our prayers.”

I have a challenge for everyone reading this right now. Say a “Hail Mary” every day for the end of this violence, because this is a battle that needs to be fought with prayer.

As Catholics, we believe that Mary is the mother of God, and is a powerful intercessor for us. She is pictured in many different images from apparitions and devotions. Here are a few of the many different cultural images of Mary and Jesus from Pax Beloved. When I see these images, I think of the love and dedication Mary has to Jesus and to all of us. They show that she is the mother of us all.