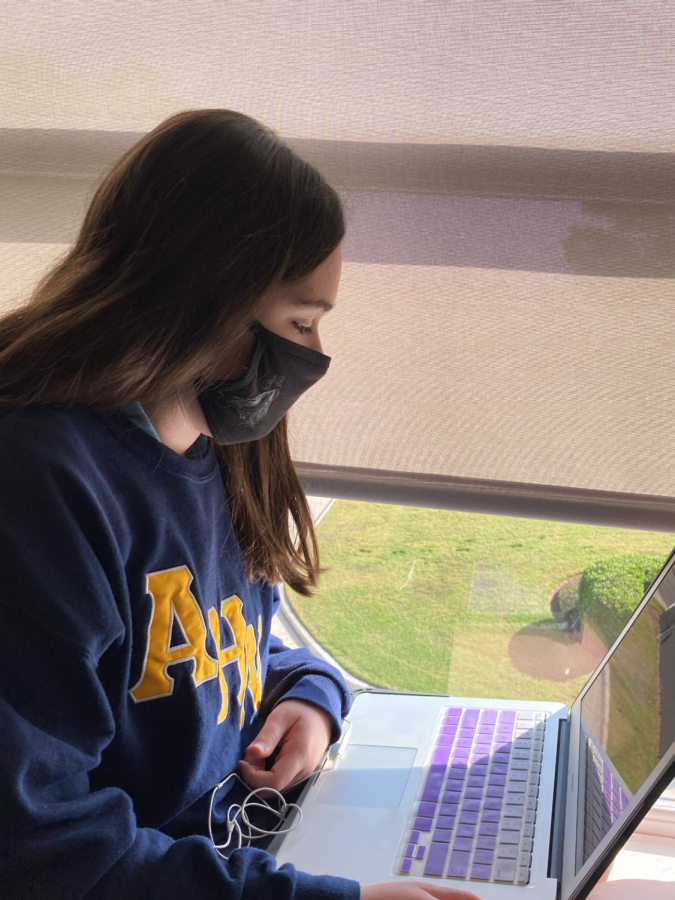 Let Him love you.

“The Lord said to her in reply, ‘Martha, Martha, you are anxious and worried about many things,’” Luke 10:41.

Does this description fit you? It surely fits me. With all of the schoolwork, the state of the world, and everything going on in my own life, I am pretty stressed.

That quote ends with Jesus saying, “‘There is need of only one thing. Mary has chosen the better part and it will not be taken from her,’” Luke 10:42.

Martha and her siblings were Jesus’ friends. He came to their house, and Martha worked very hard to prepare a perfect meal for Him, while her sister Mary, who is a different Mary than the mother of God, sat at His feet and listened to Him. Martha, being a perfectionist, needed help and was annoyed with Mary because she wasn’t helping. Jesus showed Martha that it did not have to be extremely perfect, and she worried too much about it instead of focusing on what was most important: actually spending time with Him.

Now, there are two ways you can react to that. You could do what I did briefly, which I don’t recommend, and be upset at yourself about being Martha and not her sister Mary.

Now, instead of imagining the first encounter with Jesus as a lecture, imagine Him tenderly telling her, “Martha, Martha, you are anxious and worried about many things.” Telling her, out of love, that her sister was doing what he truly wanted, which was giving Him her heart. He called Martha to Himself in that moment, into His love. Now, imagine Him saying it to you: “Anna, Anna,  you are anxious and worried about many things.” But imagine the tenderness and love in it, not condemnation. Let Him love you in the stress. Give Him the burden of it. He will not take all of it away, but He will help you in little ways and love you through it all.

The thing about Martha is that her story did not end there in the anxiety. Everyone hears this passage and forgets about the rest of the story. Her encounter with the Lord changed her. Later on, she had so much faith in the Lord.

“When Martha heard that Jesus was coming, she went to meet him; but Mary sat at home. Martha said to Jesus, ‘Lord, if you had been here, my brother would not have died. [But] even now I know that whatever you ask of God, God will give you,’” (John 11:20-22).

“Jesus told her, ‘I am the resurrection and the life; whoever believes in me, even if he dies, will live, and everyone who lives and believes in me will never die. Do you believe this?’ She said to him, ‘Yes Lord. I have come to believe that you are the Messiah, the Son of God, the one who is coming into the world,’” (John 11:25-27).

And Jesus rose Lazarus from the dead.

She is now St. Martha.

So how can you show Him your faith in the midst of anxiety? How can you allow Him to alleviate your stress?

This is a video I took of adoration during the freshmen Refocus 9 on January 22. I had the opportunity to be there, and I was very grateful for the hour break from school.

As the song suggests, “Run to the Father”. Go to the school chapel for a few minutes. Jesus, fully present in the Eucharist, is there in the tabernacle, waiting for you to visit Him. Just talk to Him throughout your day, He is always by your side and waiting for you.