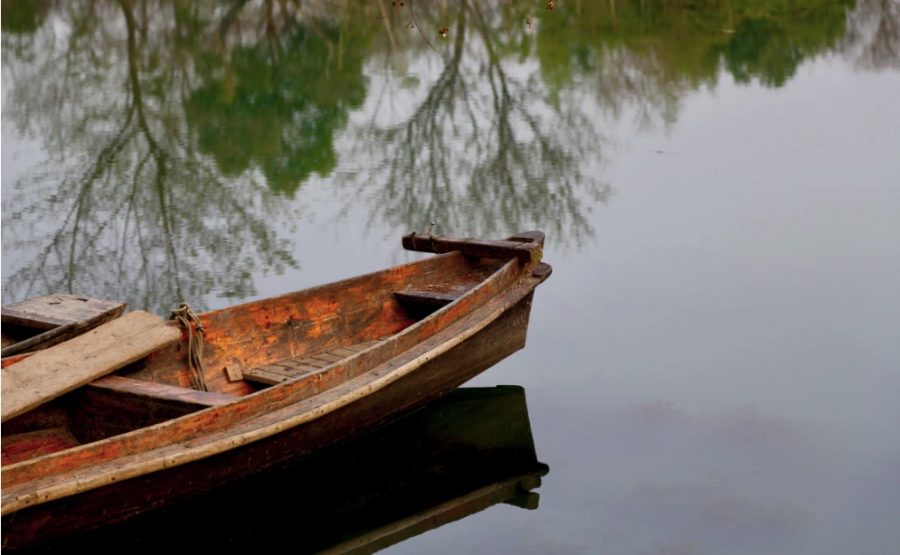 “A violent squall came up and waves were breaking over the boat, so that it was already filling up. Jesus was in the stern, asleep on a cushion.”

I’m on the boat too. A younger version of myself. I am sitting near Jesus in the stern, trying to keep myself near Him even in the storm that keeps rocking us around. He doesn’t appear to be awake, and I don’t quite understand why, but I try to trust Him. I think I am doing a good job of it, but at the same time I am really stressed and crying.

The storm is moving more and more, and I am starting to be knocked around the stern. I keep trying to cling to Him, but it is getting harder. I am getting more and more anxious, and I start allowing myself to be moved around without realizing it.

But then my eyes land on Him again. I know I need to just trust Him in whatever He’s doing, but I’m struggling, so I scoot over to Him again. I struggle, but I try to stay near Him because of who He is.

“They woke him and said to him, ‘Teacher, do you not care that we are perishing?’ He woke up, rebuked the wind, and said to the sea, ‘Quiet! Be still!’ The wind ceased and there was great calm. Then he asked them, ‘Why are you terrified? Do you not yet have faith?’” Mark 4:37-40

The others come in and wake Him up. He tells the water to “Be still!” and then He scoops me up in His arms and asks me why I was scared, that if I have faith in Him I will be safe. Then, He gently tells me to be still as well. That I am in His arms and safe. It is time to rest.

I had this reflection when we had Lectio Divina in adoration during lunch and advisory last Thursday. Lectio divina is a prayer where we reflect on a passage a couple of times in a row. Typically one of the times you put yourself into the story, the next time you listen for a specific phrase to stand out to you, and the last time you allow God to speak to you through it.

I obviously put myself into this story as it was being read aloud, and was surprised with this outcome. The waves are all of the stress and struggles of my own life. As soon as I take my eyes off of Him, I am knocked about the stern too. Then, I make an effort to give it all back to Him again and to trust His plan again, and He scoops me up and helps me. He gives Himself to me and helps me return to Him.

Don’t overcomplicate your return to Him when the seas rock you. Allow Him to pick you up too, and be still with Him. Let Him do the work. Just lay it all in His hands.