It’s on now: Florida at Alabama, with both undefeated 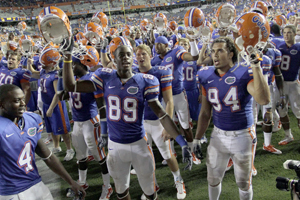 GAINESVILLE, Fla. _ Are we there yet?

Destination: Tuscaloosa, Alabama. Itinerary: Try to knock off the best team in the country, which also happens to be the defending national champion.

That’s what it’s all about with the Florida Gators, isn’t it?

There’s always an obsessive quest to be on the top of the world, to scale Everest every season, dismissing any possibility of peaks and valleys along the way.

The Gators are now 4-0 after dismantling Kentucky, 48-14, Saturday night in the Swamp. No biggie really. It was an expected beatdown, much like it’s been for the last 24 years. There have been some unfortunate Gators souls who died young without ever uttering the phrase: “We lost to Kentucky.”

But that’s not the focus of Florida’s attention at the moment. For the next six days, it will be Bama, Bama, Bama.

The team that knocked the Gators off their national championship roll last season. The team that advanced to the Rose Bowl to play for the title while the Gators settled for the lovely consolation prize in the Sugar Bowl.

There is nothing wrong with that, expect that a lot of Florida fans have been spoiled silly. Every game should be a rout. National titles should be commonplace.

They are not, of course. Former Coach Steve Spurrier used to emphasize the importance of winning conference titles. He did that very well, taking six of them during his 12-year run.

But even he grew tired of the big-time expectations and followed the money to the NFL.

Urban Meyer is a better fit for the craziness of things in Gainesville, even though he’s got documented medical proof that the task can be overwhelming.

He is going to have to muster up some big-time mojo for college win No. 101. Alabama rallied to beat Arkansas on Saturday afternoon, perhaps exposing some vulnerability in a team that seemed unbeatable early on.

Despite the 4-0 record, Florida’s fall report card is incomplete in many ways. It’s been a sliding scale of difficulty, moving from Miami of Ohio and South Florida to SEC victories against Tennessee and the Wildcats.

A lot of this stuff reads like fantasy stats:

True freshman Trey Burton has 18 touches and eight touchdowns, including a team-record six Saturday night _ five on quarterback keeps and another as a wide receiver. Tim Tebow … see ya, buddy. There’s a new sheriff in G’Ville and his name is Trey Burton.

The kid is fabulous and my favorite Gators player already. He’s played as many as five positions in one game _ quarterback, wide receiver, H-back, fullback and starter on the kickoff cover team.

It’s pretty simple strategy: “Getting the ball in the hands of a fast player,” as Meyer notes.

The Gators defense also has been a great pick-me-up. It has 12 interceptions in four games.

The Gators have scored 151 points in those four victories, and even gave fans the pleasure of scoring in the first quarter for the first time this season.

But now we move from fantasy land to reality TV, live on CBS.

We should all be able to agree that the good times won’t roll so easily next Saturday.

But hey, that’s what it’s all about for Florida.

To be the best you have to beat the best, as the saying goes in every locker room across America.

Florida will cozy up to the visitors’ digs in Tuscaloosa next week, knowing that they have the perfect chance to silence the skeptics.

A lot of them might not even be wearing orange and blue.

Visit the Sentinel on the World Wide Web at http://www.orlandosentinel.com/.