Giants surprise Phillies to win NLCS; next up, the Rangers in World Series 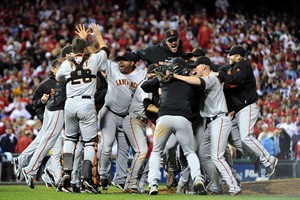 PHILADELPHIA — A team with virtually no offense is headed to the World Series.

But on Saturday night at Citizens Bank Park, the Giants were crowned the champions of the National League, beating the Philadelphia Phillies, 3-2, to win the best-of-seven series, 4-2.

When the Giants last reached the World Series eight years ago, they did so with the likes of Barry Bonds and Jeff Kent in their lineup. This time, they were taken to the Promised Land by journeymen like Aubrey Huff and Juan Uribe.

Uribe, a .248 hitter in the regular season, hit the solo home run that decided the game, an opposite-field shot off Ryan Madson with two outs in the eighth inning that stunned the hostile Philadelphia crowd into silence.

Brian Wilson closed the game with a five-out save, striking out Ryan Howard with two men on to earn the Giants a date with the Texas Rangers in baseball’s most glamorous stage. The series will open in San Francisco on Wednesday.

Wilson was called into the game with one out in the eighth inning to replace ace Tim Lincecum, who pitched two days earlier but was summoned for relief duty on this night. Lincecum struck out Jayson Werth to start the eighth inning, but gave up back-to-back hits to Shane Victorino and Raul Ibanez.

Wilson forced the next batter, Carlos Ruiz, to line into a double play.

The Giants won the game despite a deplorable start by left-hander Jonathan Sanchez, who failed to get a single out in the third inning.

But Sanchez left his mark on the game by leaving a mark on Chase Utley’s back.

On his way to first base, Utley tossed the ball back to the mound, prompting Sanchez to curse at him. Utley cursed back at him.

So did the bullpens – awkwardly. Because the home and visiting bullpens share the same path to the field, two sets of relievers had to go through the same door.

No punches were thrown, no players were ejected. But with no outs and two men on base in the third inning, Sanchez was done.

Sanchez’s mess was cleaned up by Jeremy Affeldt, who retired the next three batters to keep the game tied, 2-2.

Sanchez threw 50 pitches, including 24 in a two-run first inning for the Phillies.

That inning, Sanchez issued a one-out walk to Placido Polanco, who scored on a double to right by Utley. A sacrifice fly to the warning track by Jayson Werth drove in Utley and increased the Phillies’ lead to 2-0.
Sanchez and Andres Torres started the third inning with back-to-back singles. A sacrifice bunt by Freddy Sanchez put them on second and third.

If there was anything positive about Flannery’s decision, it was that it allowed Huff to reach second base. So when Polanco made an errant throw on a slow roller hit to him by Buster Posey, Huff was able to score and tie the game, 2-2.

Phillies starter Roy Oswalt pitched six innings and was charged with two runs, one of which was earned, and six hits. He struck out five.

The Giants received a key relief performance from their Game 4 starter, 21-year-old Madison Bumgarner.
The kid pitched two scoreless innings, but had to bear down to do so.

Loading the bases in the fifth inning, Bumgarner forced Shane Victorino to ground out to him to end the inning.

Raul Ibanez led off the sixth inning with a double and reached third with one out, but didn’t score, as Bumgarner struck out Ben Francisco and forced Jimmy Rollins to fly out to center field.