Seahawks pull a surprise at home 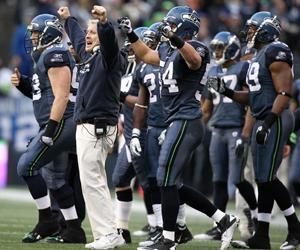 SEATTLE — Marshawn Lynch jogged back to the sideline, the football tucked in the crook of his left arm while his right arm curled up above his shoulder, biceps flexed in a bodybuilder’s pose.

And as Lynch stood there, muscles flexed, it was clear that these Seahawks were stronger than anyone expected. Strong enough to survive being the largest home underdog in NFL playoff history. Strong enough to trail by 10 points twice in the first half against the reigning Super Bowl champs and still come back.

And ultimately strong enough to KO the Saints, 41-36, in a victory sealed by Lynch’s touchdown run that put Seattle ahead by 11.

“It was one of the greatest runs I ever saw,” Seattle coach Pete Carroll said. “At a time when you needed it most, it was just an incredible play. And I’m sure that everybody will remember that run forever that were at that game. It was just one of those moments.”

And it was just one of those games.

Matt Hasselbeck left the field with his son, Henry, carried on his shoulders after carrying Seattle’s offense on his back. Hasselbeck threw four touchdown passes to set a franchise playoff record.

Seattle’s defense took shot after shot from the New Orleans offense, but ultimately forced the Saints to settle for three field goals and never allowed a touchdown longer than 6 yards.

Doubted all week and down by 10 points to New Orleans, the first NFL team with a losing record ever to win a division title went and earned its way to a fifth consecutive home playoff victory and one more game this season. At least.

“I don’t know where we’re going,” Carroll said. “But I can’t wait to get there.”

The Seahawks trailed by as many as 10 points, led by as many as 14, and yet the outcome of this game wasn’t sealed until tight end John Carlson caught New Orleans’ onside kick with 1:30 to play after Devery Henderson had caught a touchdown pass that cut Seattle’s lead to five points.

Seattle had the ball and New Orleans had one timeout. Seattle’s was able to run two plays, then Hasselbeck took a knee to exhaust the clock. Saints linebacker Marvin Mitchell fired off the ball, striking Carlson. Carlson stepped toward Mitchell and pointed up toward the scoreboard as 66,336 spectators had Qwest Field echoing with TNT-grade decibels.

“The whole game, it just felt like we were going to win,” Carroll said. “I know it didn’t look like that.”

No, it didn’t. Not when Hasselbeck’s third pass was intercepted, setting the Saints up for a 10-0 lead.

“You could easily tank right there,” Hasselbeck said. “The crowd could have easily tanked it on me, too.”

But faced with the possibility of disappearing as meekly as many expected, the Seahawks found some starch. New Orleans had scored on each of its first three possessions and led 17-7, and it was then that Seattle started a run that was nothing short of championship caliber.

Seattle’s biggest example of championship-caliber play might have come in the fourth quarter after the defending Super Bowl champions cut the Seahawks’ lead to four points and were hoping to get the ball back when they punted with 4:20 to play.

The first Seattle play was a run to Lynch for no gain. The second was a power run to the left, a play downright elementary in terms of complexity.

Six different Saints touched Lynch on the run, more than half the defense. New Orleans cornerback Tracy Porter was in position to make a tackle. At least he was until Lynch delivered a right-handed shove that deposited Porter 5 yards down field.

The Seahawks won their fifth-straight playoff game at home.

Visit The Seattle Times Extra on the World Wide Web at http://www.seattletimes.com/.