With patience and poise, Rodgers leads Packs to next round 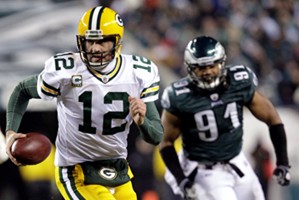 PHILADELPHIA — Mike McCarthy gave the kind of answer that could turn up in a beer commercial.

“Milestone?” he said, wincing in confusion, with the kind of voice inflection usually associated with other one-word questions such as “Practice?” or “Playoffs?”

“We don’t think about it that way,” the Packers coach added after gathering his composure following a question about the significance of Aaron Rodgers’ first playoff victory. “We’re just getting started.”

The Packers looked like a team that still has plenty of football to play in Sunday’s 21-16 win over the Eagles.

Rodgers completed 18 of 27 passes for 180 yards and three touchdowns, the defense contained Michael Vick and his assortment of speedy cohorts, and the team that lost its star running back on the first game of the season in Philly in September may have found his replacement. James Starks ran for 123 yards, shattering the Packers’ postseason record for a rookie.

But it was Rodgers who won the game not with his stats but with his poise and patience, two elements that trickled down through the entire team. While the Eagles relied on quick-strike capabilities, the Packers were able to grind out scoring drives of 68, 57 and 80 yards, each averaging 11 plays and just over six minutes of possession. And after three seasons as Green Bay’s starting QB, Cheesehead patience has paid off. He finally has that postseason win to begin building his legacy.

That won’t be enough for them to name Aaron Rodgers Avenue in Green Bay, but the quarterback will have a shot at playoff win No. 2 Saturday when the Packers travel to play the top-seeded Falcons.

The Packers scored their final points with 7:33 left in the third quarter, but they were big ones. The Eagles had forced Rodgers to fumble deep in his own territory on the first possession of the second half and converted the turnover into a touchdown that made it 14-10.

The Packers responded by driving 80 yards on 12 plays — only four of them going for more than 6 yards — and capped their journey on a play that oozed patience. Rodgers swung a screen pass out left to Brandon Jackson, but instead of charging ahead, Jackson waited for his blockers to align in front of him. He was able to easily slip into the end zone on a 16-yard reception for a 21-10 lead.

“He saw us coming and he had enough awareness to let us set up the blocks,” said guard Daryn Colledge, who was one of the escorts. “I think a lot of guys would probably have taken the 5 or so yards and been happy, but he made a veteran move and let the blocks set up and scored six points. That’s a credit to him.”

After that, it was up to the Packers’ defense to hold on for the win.

A second missed field goal by the normally reliable David Akers, this one from 34 yards with 13:05 left, helped that cause.

“We can all count,” Eagles coach Andy Reid said of the two missed field goals in a five-point loss. “Those points would have helped.”

The Eagles scored with 4:02 left, Vick stretching the ball just over the goal line, to make it 21-16. But a two-point conversion pass from Vick to Brent Celek was waved off because Celek had stepped out of bounds before the reception. The Eagles tried again from 7 yards but Vick had to throw the ball away to avoid a sack.

The end of the game would have been much more interesting had the Eagles been within a field goal of the Packers. Instead, they trailed by five and needed a touchdown to win. Vick’s floating pass into the end zone with 33 seconds left was intended not for game-breakers DeSean Jackson or Jeremy Maclin but Riley Cooper, and it was intercepted by Tramon Williams.

Vick, whose redemption story has been the current of this NFL season, said he tried to do too much on that last pass. Unlike Rodgers’ patience, Vick forced it, and now his season is over.

“I feel like I got greedy and took a shot at the end zone and didn’t throw the right ball I wanted to throw and got picked off,” Vick said. “It’s a bad way to go out but hey, I went out swinging.”