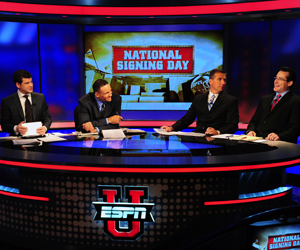 Turns out his successor — Jimbo Fisher — is pretty convincing, himself.

Fisher’s Seminoles, 10-4 last season with victories over the Florida Gators and Miami Hurricanes, scored big again Wednesday off the field.

No doubt aided by coaching changes at Miami and Florida, the Seminoles were among a handful of programs that dominated the national recruiting landscape.

ESPN rated FSU’s recruiting class No. 1 in the nation Wednesday and Scout.com rated it No. 2, with the Seminoles’ 29 signees encompassing two consensus five-star prospects and 13 four-star players.

Florida gained significant ground and a No. 8 ESPN ranking (14th by Rivals and 21st by Scout) down the stretch by nabbing two touted late additions — one of them Fort Lauderdale St. Thomas Aquinas cornerback Marcus Roberson.

As of Wednesday night, the Hurricanes’ class was rated 37th by Scout and 36th by Rivals.com. But UM coach Al Golden, who took over in mid-December, seemed truly pleased with convincing eight players formerly committed to other programs to flip to Miami, eventually lifting his class nearly 50 spots in the recruiting rankings.

The class would rise even more should U.S. Army All-American quarterback Jacoby Brissett of Palm Beach Dwyer choose Miami over Wisconsin and Florida on Friday night, when he plans to make his announcement.

“It was a hectic time for everybody from where we started on Dec. 13 with three commitments,” Golden said during a news conference. “I think we were ranked 85th at the time. To come nearly 50 spaces in a short period of time â€” only 15 days I could go out â€” it’s something we’re proud of, and it should be a precursor of what we can do at the University of Miami moving forward.”

The Hurricanes’ most touted signees: defensive end Anthony Chickillo of Tampa Alonso, MVP in the Under-Armour All-American Game and the first third-generation Cane to play football; and Las Vegas Bishop Gorman defensive end Jalen Grimble, who delivered the news in the wee hours Wednesday that he would sign with UM over his former choice of Southern California.

Over in Southwest Miami-Dade County, the area’s other local program — FIU — put together its deepest and most talented class in the school’s 10-year history. The Golden Panthers’ class was highlighted by Boyd Anderson offensive weapon Corey Tindal, who chose FIU over BCS schools Maryland and Minnesota.

Among FIU’s 25-man class, 11 were three-star talents, including defensive end Denzell Perine, the Mobile recruit who was one of 14 defensive players to sign.

“The momentum really got created when he first took over for Bobby Bowden last recruiting class,” Herbstreit said. “â€¦These players today in high school football, when they were 9, 10, 11, and 12 years old, Florida State was dominant.

“Jimbo Fisher has done a very good job along with his staff in making Florida State kind of the cool school right now to go to for a kid growing up — whether (he’s in) the state of Florida or anywhere in Southeast part of the country.”

Florida coach Will Muschamp came up big by not only signing Roberson, but by getting Brooksville Nature Coast receiver Ja’Juan Story. The Gators’ class was about hanging onto the commitments former coach Urban Meyer had on the hook, while trying to land a few blue-chippers in a short time frame.

“I’m real pleased,”‘ Muschamp said. “The Gators got better (Wednesday). Recruiting is all about developing relationships and trust, and it’s tough to do that in a short period of time. â€¦In two or three years, we’ll know about what kind of class this was. (Wednesday) is not the day to judge anything.”

Other programs that merited high rankings included Alabama, Auburn, USC, Texas, Ohio State, Georgia, Notre Dame and Clemson. And Louisville, coached by Charlie Strong and assisted by recruiting coordinator and former UM assistant Clint Hurtt, signed 13 players from Florida. Among the South Floridians signing with the Cardinals were quarterback Teddy Bridgewater and receiver Eli Rogers, both out of Miami Northwestern and formerly committed to the Hurricanes.

Visit The Miami Herald Web edition on the World Wide Web at http://www.herald.com/.