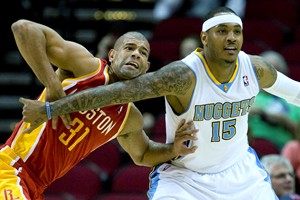 NEW YORK — The long, twisting-and-turning Carmelo Anthony Melo-drama is over, with the Nuggets’ All-Star forward on his way to the Knicks.

But the Knicks ultimately played a steep price.

Three starters — point guard Raymond Felton, forward Danilo Gallinari and rookie center Timofey Mozgov (whom the Nuggets reportedly demanded to seal the deal) — plus sixth man Wilson Chandler (a restricted free agent this summer the Knicks may not have resigned) head for Denver.

Eddy Curry (and his expiring $11.3 million contract) plus little-used forward Anthony Randolph go to Minnesota for a pair of second-round picks (but not a first) that will go to Denver.

The Knicks also will send their 2014 first-round pick (the earliest they are allowed to trade according to NBA rules forbidding the trade of consecutive No. 1 picks), plus $3 million to Denver.

So with 28 games left in the regular season, the Knicks (sixth in the East playoff standings) will be adjusting on the fly with six players (four from the rotation) going out and five new ones coming in.

But it brings them Anthony, the Brooklyn native whom their cross-Hudson rivals, the Brooklyn-bound Nets, wanted badly enough that owner Mikhail Prokhorov twice broke his word that his team was out of the running.

Anthony, meanwhile, gave no indication of his impending move during a Monday night appearance on Conan O’Brien’s TBS Show, during a playful exchange in which the host asked him to choose between Manhattan clam chowder, New Jersey salt water taffy and a Denver omelette. He chose the latter.

But ultimately, not the Nuggets’ three-year, $65 million contract extension that he’s now certain to sign with the Knicks — but wouldn’t with the Nets, whose trade offer was considered stronger than the Knicks’, prompting the Nuggets’ insistence on Mozgov.

News of the imminent deal came down Monday, hours after coach Mike D’Antoni conducted a “business as usual” practice, the team’s first following the All-Star break, to prepare for Wednesday’s game against Milwaukee (for which Anthony is unlikely to be available).

“We’re ready for anything,” said D’Antoni, who may have to cobble together a lineup for the Bucks, because it’s unlikely all of the principals in the deal will pass their physicals in time to play Wednesday.

Gallinari may have given a hint after practice of what was about to happen when he said of leaving the Knicks, “It’s tough to leave New York.” His use of that tense may have been an English-as-second-language issue — and because he can be a restricted free agent after next season under current labor rules, he eventually could return to the Knicks.

Felton, however, was signed as a two-year rental to bridge the gap to the anticipated 2012 free agency of point guards Chris Paul and Deron Williams. Neither he (a co-captain, as is Stoudemire) nor Chandler spoke to reporters Monday.

Whether the Knicks will have salary-cap room to sign either (or Dwight Howard, also a potential 2012 free agent) to a maximum contract following this summer’s labor negotiations is uncertain.

Billups steps in for Felton and although he’s due $14.2 million next season, he can be bought out for $3.7 million.

Mozgov, meanwhile, said of possibly being traded, “If I were traded, it would be a good experience for me because I will know how it works.”

His departure means the Knicks have only one pure center on their roster, the often-injured Ronny Turiaf, although Stoudemire has started 27 games there this season instead of his natural power forward spot.

With Anthony at small forward, Billups and rookie Landry Fields round out the eventual starting lineup.

The Knicks, though, could have as few as eight players available Wednesday, including Shawne Williams, Bill Walker, Toney Douglas, Roger Mason Jr. and rookie Andy Rautins.