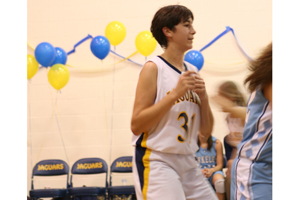 Academy athletes received awards for excellence in their respective sports during late February.

Prep Volleyball.com named  Sidney Brown as one of the top freshman volleyball players in the nation. Brown, who led the Jaguars with 292 kills last season, was selected to the Frosh 59 list, which consists of the site’s overall compilation of the best freshmen in the nation.

Receiving top awards at the Winter Sports Banquet on Wednesday, February 23, were  the following athletes: