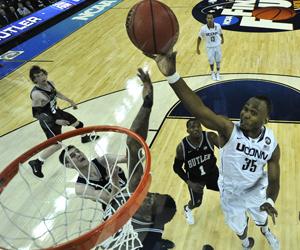 HOUSTON — With every brick launched by Butler Monday night in cavernous Reliant Stadium, Connecticut built a lead and control of the NCAA final, finishing a comeback from its middling Big East regular-season status to national champion.

The Huskies’ defense completely shut out the Bulldogs’ inside game, forcing their opponents to unsuccessfully launch from the perimeter, and their offense warmed up in the second half, propelling UConn to a 53-41 victory before a crowd of 70,376 and giving head coach Jim Calhoun his third national championship.

The Huskies (32-9), who won their last 11 games after struggling at the end of the Big East regular season, won their first title since 2004. They also won in 1999, giving the 68-year-old Calhoun three, more than any coach except John Wooden, Adolph Rupp, Mike Krzyzewski, and Bob Knight.

It meant the end of a wild postseason. After finishing 9-9 and tied for ninth in the Big East, UConn won five games in five days to capture the Big East tournament, and then carried on unbeaten through the NCAAs thanks to the marvelous play and leadership of junior guard Kemba Walker.

Walker, a junior high school teammate of Villanova’s Corey Fisher in the Bronx, struggled with his shot, connecting on just 5 of 19, but led the Huskies with 16 points and directed his teammates all over the floor.

For Butler (28-10), trying to become only the second No. 8 seed (besides Villanova in 1985) to win a national championship, the loss marked its second straight disappointing end to a season. The Bulldogs lost to Duke, 61-59, in the 2010 title game.

It was excruciating to watch Butler shoot the basketball. The Bulldogs made just three shots in 31 attempts from inside the three-point arc. They got nothing inside, as the rotating UConn center tandem of 6-foot-9 Alex Oriakhi and 7-foot Charles Okwandu plus 6-8 forward Roscoe Smith combined for nine blocked shots.

For the game, the Bulldogs shot 12 of 64 for 18.8 percent, connecting on just 16.2 percent of their attempts in the second half when they started out two of 25.

“We knew that we could really defend them and we knew we could switch guard-to-guard and all the things we eventually did,” Calhoun said. “The major adjustment (at halftime) was that we were going to outwill them and outwork them, and eventually we outplayed them. They’re a terrific basketball team.”

“Forty-one points, 12 for 64, is not good enough to win any game, let alone the national championship game,” Butler coach Brad Stevens said. “We gambled a little late because we had to, because we were just trying to figure out something to generate, a turn of the tide, and we just couldn’t.”

After taking a 22-19 halftime lead, the Bulldogs got a three-point basket on their initial possession of the second half to go up by six, and then the lights went out. They scored three points in the next 13:25, including a scoreless stretch of 6:22, and the Huskies turned their deficit into a 13-point lead.

Oriakhi, who finished with 11 points and 11 rebounds, hit a baseline jumper to put UConn up by 13, and then his three-point play gave the Huskies their largest lead, 44-30, with 5:49 remaining.

“I had a rough game,” Walker said. “I wanted one of those guys to pick me up. I told Alex, ‘Those guys can’t guard you 1/8in the paint3/8 and make sure you post up and post up hard,’ and that’s what he did. He played great. I told him he had to rebound and he said, ‘I got you.’ ”

Butler had one run left. Mack knocked down back-to-back three-pointers to reduce the deficit to 49-41 with 1:32 to play, but the Bulldogs never scored again.

It was bedlam after the game. Walker ran all over the court hugging people, including his mother. He cradled the national championship trophy during the playing of “One Shining Moment.”

“It’s been crazy — a lot of media, a lot of attention, but we all tried to cherish every moment and we stayed with each other, and we’re national champions,” Walker said. “It was better than I thought it would be. I feel like I’m dreaming.”