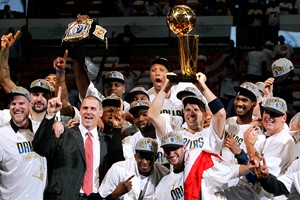 It’s the Dallas Mavericks calling, just to say, that during 31 years of existence, there’s been some rough roads to travel, with even a lost decade of awful basketball mixed in there, but if you try-try-try, you just might find . . .

You can eventually get what you want.

On a Sunday evening in South Florida, the Mavericks got just that.

The O’Brien Trophy now has a Texas twang, along with a German accent, and somebody needs to attach some airplane wings, Jet-like, as the final touch.

Dallas Mavericks, champions of the world.

For once, “unbelievable” as uttered in the sports world is an understatement. Not just the improbable, but the impossible came true.

And the clincher on this foreign basketball soil didn’t even come with a final-seconds sweat. The Mavericks took the game over late in the third quarter, then saw the almighty Miami Heat cave like a sand castle caught in the South Beach tide.

Mavs by 105-95. Mavs in six in the NBA Finals. Tell the 50 states. Tell the world. Tell Germany and Puerto Rico, and for Ian Mahinmi, tell France, too.

Hold it. Didn’t the Fraudulent Three of D-Wade-LeBron-Bosh already proclaim themselves world champs? Like last summer?

Throughout the NBA empire, the collapse of the Heat will be cheered, and the Fraudulent Three will be jeered. Let it be known, kids, that arrogance, flopping and fake injuries don’t pay.

But in the end, this Finals wasn’t about the demise of the premature, self-proclaimed Heat dynasty, although that has been the national story line, and will continue to be. That’s the way the media go, and with some justification, plus, yes, joy.

What the Mavericks accomplished, however, over six games takes the NBA back to another time. “Old school” is, and was again Sunday night, the Rick Carlisle description.

Even the “star-system” known as Dirk and Them became blurred, because not only in this Game 6, but also in the Game 5 win back home on Thursday, Dirk had immense assistance.

And after a 1-for-12 shooting nightmare in the first half Sunday, the Big German needed plenty of assistance.

But to say these Mavericks would eventually end up champions of the world, and would sweep the Lakers along the way, and would wear down and eventually destroy the Heat, that would have been crazy talk, not to mention stupid talk in late April as the first round opened against the Portland Trail Blazers.

There have been seasons in the past when the Mavericks were considered championship contenders. Didn’t happen. Not even close. There was the one gruesome season, the Fix of ’06, when they reached the Finals, and were taken down by Dwyane Wade and that version of the Heat.

Wade’s presence definitely helped fuel what happened this time, and so did his antics in the series. Afterward, it was like Carlisle, very gracious in his praise of the Heat organization, was also firing a justified shot over the head of Wade, and maybe LeBron, too.

“A series like this gets very personal,” he said. “Then they have the incident with the camera, and the coughing and all that stuff. You get to Game 5, Game 6, and it becomes personal. Our guys took it personally tonight. They were not going to be denied.”

Cough on that, Dwyane.

And then Rick continued firing.

“Dirk and Jet have had to live for five years with what happened in 2006,” he added. ” As of tonight, those demons are officially destroyed.”

Dwyane went down in the rumble, too.

“(The Mavs) made a statement that’s a colossal statement, not just about our team, but the game in general,” said Carlisle. “Playing it a certain way. Trusting the pass. Playing collectively. Believing in each other.

“Our team is not about individual ability, it’s about collective will, collective grit, collective guts. We’re skilled and talented, too. But our game is on the ground.”

More Carlisle: “The guys we were playing, their game was in the air. Fortunately, as the series went on, we stayed on the ground enough to be able to win it.”

Win it with team. The team thing was a monster for the Mavs in Game 6.

Terry, with 19 first-half points, and 27 overall, saved the Mavs on Dirk’s poor shooting night, although as usual, Nowitzki came back around in the critical fourth quarter, scoring 10 points in the last 7-plus minutes to keep the Heat from a rally.

And everyone was pushing, although only Terry and Dirk remain from the ’06 club.

Right down the line, all the way down to Mahinmi, who had to play 11 minutes (Tyson Chandler had foul problems and the injury again prevented Brendan Haywood from playing), there was value.

J.J. Barea thrived again as a starter, DeShawn Stevenson had a first-half roll with the 3-ball, and Jason Kidd and Shawn Marion worked their butts off on defense on those guys named Wade and LeBron.

Evil lost in the Finals. A team won.

The first world championship since the Stars in 1999, and the first O’Brien Trophy ever now calls Dallas-Fort Worth home.