Futile football in the Sunshine State 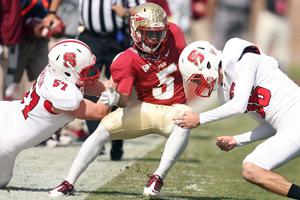 All three powerhouse Florida collegiate football teams are absent from the top twenty-five rankings this season for the first time in almost twenty years. The Florida State University Seminoles, the University of Florida Gators, and the University of Miami Hurricanes, currently ranked #29, #46, and #36 respectively, have failed to live up to preseason standards (BleacherReport.com). In particular, FSU fell twenty-two places from its preseason #7 rank.

So, what exactly has caused the steep downfall of these teams? For starters, UF’s loss of former head coach Urban Meyer, giving way to the less experienced Will Muschamp, and the graduation of quarterback Tim Tebow, yielding to the less experienced John Brantley as the starter, hit the program hard. Andy Hutchins, author of the bi-weekly “Chomping at the Bits” article for the Alligator Army, comments that the team is “plain terrible” due to the “personnel” issues. He is pessimistic about the next few years as “help is not on the way.” He credits the teams “pathetic showing” directly to the inexperienced program. He predicts, even, that this will be the first time since 1979 that the Gators will not qualify for a bowl game.

Richard Mangan, an avid sports fan and follower of collegiate football for the better part of 40 years, titled this season as the Gators’ “rebuilding year.” The team “now lacks the leadership that Tebow provided,” comments Mangan, “and that, coupled with several recruits not meeting expectations, has been the team’s recipe for disaster.”

In UM’s case, preseason expectations were not very high in the first place because they have not been at their prime for two years. Miami native Andrew Rodriguez commented, “The team’s poor season last year was due to the new head coach, Al Golden, and a young freshman team. Just like Florida, the failures have been due to inexperienced leadership. They need some time to get back on their feet.” Additionally, the Ponzi Scheme scandals surrounding the Miami football program, spearheaded by former Hurricane booster Nevin Shapiro, have been “devastating to the future of Miami football” (ESPN.go.com) by taking so much attention away from the playing field and jeopardizing future recruit classes.

Florida State stands as the most shocking failure in the state in terms of preseason expectations. Daniel Brommer, a featured columnist for BleacherReport.com, said, “E.J. Manuel was supposed to be a Heisman dark horse and the defense was supposed to be tops in the country. Now, Manuel is a disappointment and the defense can be considered a failure.” He accredits this to the quarterback’s injuries and thinks that the expectations were too hyped up for such a young team, making them appear worse than they really are.

Rodriguez, a current FSU student, commented, “Florida State hasn’t been terrible, but in comparison to their preseason expectations, they seem to have failed. Too much pressure has been put on such a young team. They are very talented, but too much was anticipated for their first year as a group.” Mangan commented that the team is “actually improving, just not as quickly as expected; the hopes were too high for those young 18-year olds.”

So what’s in store for the teams in the future? Without a doubt, Florida State shows the most promise for the next few years. Rodriguez commented, “It may take at least one more year of development and experience for these players to really hit their peaks,” but thinks that the team has incredible potential and, as always, phenomenal upcoming recruits. “They need to make noise in the ACC and motivate these young players.” Bud Elliot, a sports critic for The Roundtable Discussion, says that the university has “one of the best offenses in the country,” and expects a “continued influx of elite talent” for the next years. Mangan thinks that they “have the most potential upside because they have the most stable coaching situation.” He also commented that all three teams will continue to be “above average because of the fertile recruiting in the state.”

Mangan also believes it will take about two to three years for one of them to “rise to the upper echelon of college football again-a status they have all held at some point in the last twenty years.” If history is any indication, it will not be long before these three traditional powerhouses rise again to the ranks of the elite.