Who will be number one in college football? 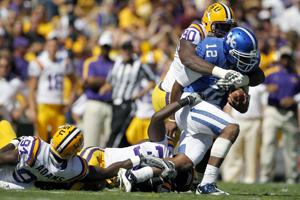 The 2011 NCAA football season has been an eventful one. Preseason standings ranked Oklahoma first, followed by Alabama and Oregon respectively. However, after this past week, only one of those teams is still in the top three. Currently, LSU is ranked number one. The number two spot is held by Oklahoma State and the number three spot by Alabama.

Out of the current top twenty-five teams, only fourteen were in the originally predicted top twenty five. Although nine out of ten of this week’s top ten teams were ranked in the preseason, Clemson has surprised everyone in the college football world by fighting their way from unranked to number nine.

“Clemson has been on fire lately,” commented college football guru Mary Green. “They have definitely been the most surprising team of the season. Oklahoma State’s success has also been unexpected. I’m still skeptical about them. I can’t see them in the BCS Championship game at the end of the season.”

LSU is considered a shoe-in for the BCS bowl at the end of the season. They have performed well all season, and proved themselves to be worthy of the number one spot this past weekend with their win against Alabama, who was ranked number two at that time.

“The thing that makes LSU the best team in college football is their speed,” shared Allison Babin. “While building their teams, most schools focus on the size of the players. They go for brute force. LSU goes for quickness and agility. They are able to play at a faster pace than the other teams. By the fourth quarter, their opponents are worn down and can’t keep up. That’s how they consistently win games. Speed is key.”

However, the identity of LSU’s competitors for the title is still in speculation. If Oklahoma State wins the rest of its games, the Cowboys will be the contenders. If they lose, the championship game could be a rematch between LSU and Alabama.

“Alabama’s good, but I think Stanford and Boise State are better,” Green said. “Unfortunately, because of the conference they’re in, Boise State is always overlooked. I think in the end, the BCS game is going to be between LSU and Stanford.”

Stanford has definitely been a powerhouse this season. With senior quarterback Andrew Luck leading the team, they have been able to be successful. Luck is the best prospect for this season’s Heisman Trophy. He was predicted to be the recipient even before the season started, and his performance throughout the season has proved himself very worthy of the award. Other contenders include Kellen Moore, Trent Richardson, Case Keenum, and Brandon Weeden.

“Luck should definitely win the Heisman this year. He really has been awesome. Kellen would have a shot at it, but once again Boise State and all their players are always overlooked,” explained Green.

All these questions will soon be answered, for the season is quickly wrapping up. There are still big games left, and many teams are trying to prove themselves. In college football, it truly isn’t over until the final whistle of the very last game blows.