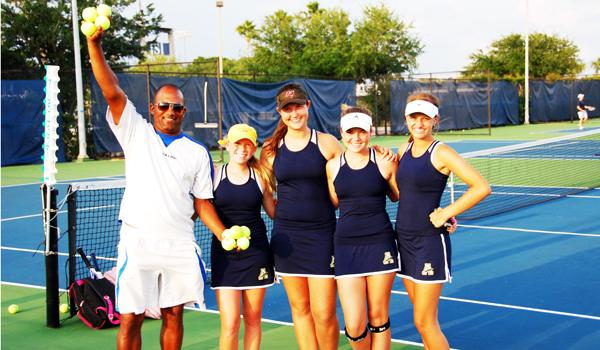 Academy tennis continues to make their mark on Florida High School competition this year. The tennis team finished their 2011 season with second consecutive district and regional titles. They also traveled to the state tournament for the second year in a row.

Because of the team’s strong record over the past two years, FHSAA advanced AHN tennis from  Class 1A to the Class 2A division. This next season will not only be interesting, but exciting.

Head coach Jonathan Collazo recently gave his perspective on the new division, “Well I have to say that comparing the level that we had in 1A, the schools that are in 2A will not be as good. But we won’t take any team for granted. We have a great team again this year. The chemistry is great between teammates; we are one as a team. Go Jags!”

Academy tennis may have a young team, but a strong one. Back again this year are ninth-grader Caroline Lozo (No. 2), eighth-grader Paige Leavy (No. 3), and seniors Christine Holcomb (No. 4) and Sarah Port (No. 5).

This year’s team will take the challenge to duplicate their performance at Districts last year, at which the girls won their singles and their doubles district titles. The number one doubles team, consisting of last year’s senior Bianca Roberts and Lozo, came in second, while Leavy and Port, the number two doubles team, won the doubles district title. The team came together to support each other and cheer on their teammates, helping them through the toughest matches. Some matches were more difficult than others, but each one contributed immensely to the team’s district win.

After Districts, Academy advanced to win against Lakeland Christian in the regional semi-final match, qualifying to play for the regional title. With number-one singles player Bianca Roberts sidelined from her singles match because of  a stress fracture in her right arm, every girl played up a spot with Lozo playing at number one and Casey Pluchino, a freshman, playing at number five. After losing two matches and winning three, the team needed one more match to win the tournament. There were only two doubles matches left. The team decided to put Roberts back in for the number one doubles match with Lozo. After time-out for protest from the rival team, Lozo and her teammates will take that philosophy with them again to every match this year.

Caroline Lozo shared her thoughts about when she and Roberts stepped onto the court after the long argument, “I honestly just wanted them to stop fighting, and let us play our matches.” She also commented on their mental strategy, “We went into the match knowing we were going to win. We were going to do whatever we could to win.”

The girls were excited to travel to Altamonte Springs, FL for the state tournament. Once they arrived, they found a few tennis courts to practice and get warm-ups in before the tournament the next day.  On the day of the tournament, everyone woke up early to drive to Sanlando Park to warm up for their matches. Lozo, Leavy, and Port won their first round matches, but then lost in the second round. Everyone was disappointed. But at the end of the day, also the end of the season, the girls agreed, “It was still an amazing experience.”