Linsanity sweeps across NBA and Pacific 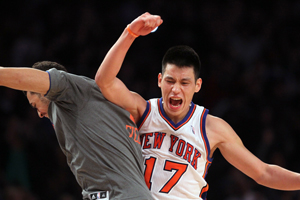 If you follow the NBA, then you have undoubtedly heard of Jeremy Lin.  If you don’t, then it may be time to start paying attention.

Lin, the point guard of the New York Knicks, is taking the National Basketball Association by storm, leading the team on a seven-game winning streak that ended with their 89-85 loss to the New Orleans Hornets on Friday, February 17, despite Lin’s 24-point game performance.

Interestingly enough, this Lin-inspired winning stretch came at a critical point in the Knicks schedule.  The team’s two superstars, Carmelo Anthony and Amar’e Stoudemire, have occuped the bench because of injuries, causing many fans to doubt whether the Knicks could win any games until they returned. However Jeremy Lin stepped up seven games ago and has boosted the team’s record and held down the fort, or at least Madison Square Garden, until the all stars are healed.

During this seven-game span, Lin averaged 24.4 points per game, including a game-high 38 against the Lakers, 9.1 assists per game, and 4.0 rebounds per game, earning him Eastern Conference Player of the Week accolades. He makes 53.9 percent of his field goals on average. These numbers would warrant an all-star appearance for any player if he held them throughout the season, but Lin’s run unfortunately came too late for him to gain a significant amount of votes for the festivities in Orlando. However, if an Eastern Conference All-Star cannot play because of injury, Lin would no doubt be on the short list for replacements.

Jeremy Lin does not simply make an impact on the hardwood, though. As a Harvard graduate, this economics major embodied the title of “student-athlete.” In an interview with the Boston Globe, his former teammate Oliver McNally said, “There’s no better representation of Harvard basketball or Harvard University to be at such a big stage.” As an undrafted free agent, Lin’s perseverance inspires all people, athletes and non-athletes alike, who face rejection and adversity.

His biggest impact may not even come in the United States, however. Lin’s recent dominance in the NBA backcourt has gained him fans from across the Pacific who cheer on this Asian-American hoopster. His jerseys, even those unauthorized garments on the black market, have sold out across China, and his success has broken through the government-regulated media barrier in that nation. Millions of Chinese citizens root for Lin, a player who fulfills the unsatisfied athletic hopes of the world’s most populous nation, dreams that once rested on the big and injury-prone body of Yao Ming.

Lin also links many Asian-Americans across the United States among themselves and with non-Asians. Regardless of race, sports fans value the skills and dedication of a player such as Lin, a feature that helps some Asian-Americans into the assimilation process. Though they still may face prejudice or at least some thinking along racial lines, this group welcomes the Jeremy Lin-effect and the unity it has created between cultural borders. Eric Liu said in an NBC News interview, “[The Knicks fans’] embrace of Lin has made millions of Asian Americans feel vicariously, thrillingly embraced. Not invisible. Not presumed foreign. Just part of the team, belonging in the game. It’s felt like a breakout moment: for Lin, for Asian America and, thus, for America.”