Tiger’s victory for real or just a flash in the pan? 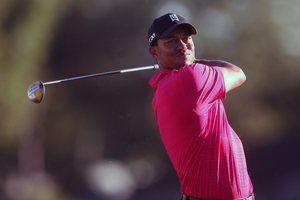 After an over two-year winless drought, Tiger Woods once again found himself atop the leaderboard at the Arnold Palmer Invitational at Bay Hill. Woods captured the victory in Orlando with a final score of 275, 13 strokes under par. He looked like his old, pre-Thanksgiving 2010-scandal self, making key putts and mastering par-5 holes. But is Tiger, the former number-one player in the world, really back or were the odds just in his favor this weekend?

Immediately after Tiger’s multiple-mistress scandal, many believed that the PGA’s best player would shake it off and return to the podium without a hitch. After all, Woods possessed a cool and calculating persona, one that allowed him to steer clear of distractions and keep emotion off the fairways.

But that faithful night did not just lead to a divorce with his former wife, Elin, and the plastering of his face on every gossip magazine in America. It also resulted in Tiger’s downward spiral in golf. In the two-and-a-half years that followed, Woods fired his longtime caddy, Steve Williams, parted ways with swing coach Hank Haney, lost multiple sponsorships, including Gatorade, Gillette, and AT&T, and fell fifty-two spots in the World Golf Ranking.

Needless to say, the scandal rocked Tiger’s world in ways that most did not anticipate. The old Woods did not emerge from the rubble that night; instead, a more vulnerable golfer came out. The drama affected his game for over two years, and many did not think he would ever be able to surpass Jack Nicholas’s record of 18 major tournament championships, a feat Americans once believed ineviable for the previously-dominant Woods.

Though his recovery was not as speedy as anticipated, golf fans are glad to see Woods slowly-but-surely crawling his way back to the top. Graeme McDowell, the player Tiger beat out to win Bay Hill, said it was “great to have a front-row seat watching maybe the greatest of all time doing what he does best, winning golf tournaments.”

Still, the jury remains out as to whether Woods will ever return to his pre-scandal self. However, one thing is certain: it is still fun to see the familiar fist pump and red shirt closing out another victory on the eighteenth green.