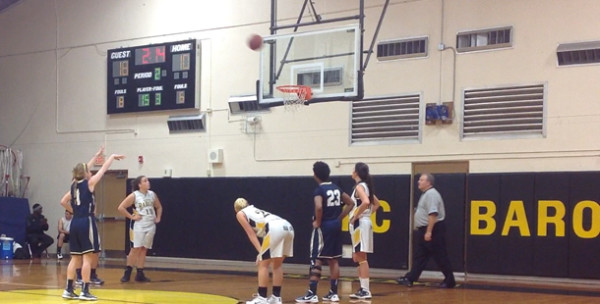 With two more games left in the season, AHN b-ball shines bright on the horizon.  With their sights on bringing home a District Championship, the girls head into their senior night game against Academy of the Lakes on Friday, September 25, followed by Berkeley Prep the following Wednesday, January 30.

The team has recorded 13 wins and 9 losses with two regular season games remaining, despite losing its start player Ashley McWilliams in late December when she suffered a season-ending injury.

Athletic Director Kevin Vargas said AHN’s win over SPC shows that the girls may rally back from the loss of McWilliams. “Her absence from the squad has challenged  the rest of the team  by not only losing her production on the court, but her leadership on and off the court.

Academy will host the 4A-District 9 tournament next week, and as the top seed, they are ready to compete.

In late December, star player of the Jaguars, Ashley McWilliams, suffered a season-ending injury, which truly has affected the coaching staff and the entire squad. Athletic Director Kevin Vargas said “the loss of Ashley McWilliams has affected the squad on and off the court; not only losing her production on the court, but her leadership on and off the court.”

Even after the blow to the Jaguar point production, Vargas said that the players and coaches are optimistic for the post-season. “Because of the loss of McWilliams, younger players have gained more experience through increased playing time.”

Mr. Vargas sees positive things ahead.  “The team has high hopes of capturing a district title, which they have not been able to do for several years.  This young team has great talent and is capable of reaching their goals with  hard work and dedication.”