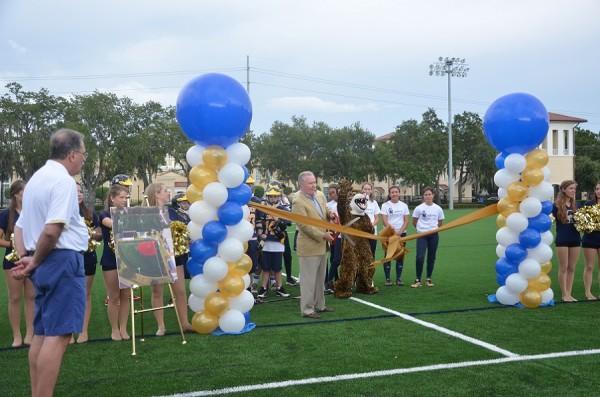 With the ceremonial cutting of the ribbon by Mayor Bob Buckhorn, the new field is ready for action.

If you drove by Academy this summer, you were in for a surprise. Noisy bulldozers and mounds of dirt replaced the normally lush soccer and softball fields as renovations were brought to Academy’s athletic facilities.

This major construction project began at the end of last school year. After finding much success with the AstroTurf installed on the school’s playgrounds, it was decided to add the artificial grass to athletic fields as well.

AstroTurf provides long term economic advantages to the school in many ways. Natural grass not only needs re-sodding about every five years, but also requires more upkeep and maintenance on a weekly basis. Additionally, hundreds of thousands of gallons of water will be saved through the use of artificial turf.

Mr. Kevin Vargas, Academy’s Athletic Director, is more than enthusiastic about the new changes. “Our fields are truly state of the art and were manufactured and installed by arguably the top turf company in the nation, FieldTurf. The type of turf used on our soccer and lacrosse field is used in college and professional stadiums throughout the nation and our softball field is the first all-turf interscholastic softball field in the state of Florida.”

At 5:30 everyone congregated around the soccer field where a gold ribbon was suspended between balloon pillars. Father Bruce Craig led a prayer, blessing the new turf and school year. Mayor Bob Buckhorn then gave a speech before finally cutting the ribbon.

After the ribbon was cut, athletes from the varsity softball and soccer teams, as well as the middle school lacrosse team, began demonstrations on the new fields.

Senior Devin Lewis, captain of the softball team, attended the inauguration on Saturday.  “It was really cool to see the new field. I had been anticipating it all summer and the whole event came together great.”