Senior athletes commit to the universities of their dreams 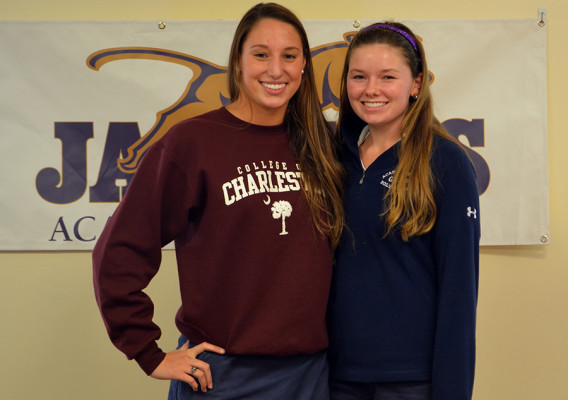 In less than a month, three of Academy’s seniors have officially signed on to continue their athletic passions at the collegiate level.

On November 13, Emmy Martin signed a contract to play golf as a TCU Horn-Frog next year. Supported by her friends, coaches, and parents, Martin wrote her signature on the TCU contract to commit to the university with a full scholarship.

Martin’s golden career began in seventh grade and has led to her current titles and championships. She has also held the title of Bright House Sports Network’s student athlete of the week. Martin hopes that golfing at Texas Christian University will progress her skills for the future.

“TCU is really known for their golf program. They’ve got several top players playing on the LPGA, and that’s my ultimate goal.”

Swimmer Clare Fleming has also committed to a school for athletics. As a part of the team since freshman year and captain of the swim team, Fleming signed her contract to the University of Charleston on November 21.

On November 22, Spring 2013’s ‘Most Valuable Rower’ Crew athlete Victoria Martinez signed her letter of intent to row with the University of Texas.

Jennifer Aprile has also signed her letter of intent to become a University of Tampa Spartan. As captain of the volleyball team, Aprile hopes to continue her passion here in her hometown. Not only was it a long-awaited day for Aprile, but it also made an excellent birthday gift, as December 5 was her eighteenth birthday.