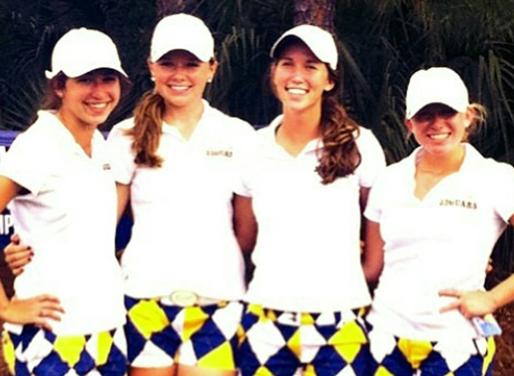 With the fall sports season coming to an end, the Academy golf team says its final goodbye to their four seniors, Emmy Martin, Casey Pluchino, Mariah Diaz, and Devin Lewis.

For Diaz, Martin, and Pluchino, this is the end of their sixth season together. Diaz, who joined the varsity golf team in sixth grade knows that it will be hard for her to leave her team. “This is especially difficult, because this team has become my second family. It is going to be hard not seeing them next year after being with them for so many years.”

Martin and Pluchino both transferred to AHN in seventh grade, and decided to try out for the golf team. According to Pluchino, “The bonds that we’ve made over the years have truly made us a family. I could not imagine what my middle school and high school experience would be like without the support of my ladies on the golf team.”

Devin Lewis, who picked up her clubs at the start of junior year, fit in with this tight-knit golf family. “These girls welcomed me with open arms. Even though I’ve only been on this team for two years, the memories I’ve made will last a lifetime.”

The goal for this final season was to win districts and regionals for the third consecutive season, and place in the top five at states. The countless nine-hole victories captured during the season only fueled their determination to take home the gold at the 2A District 17 tournament, held at Sun City Center’s Sandpiper Golf Course, and regionals at Sebring’s Highland Ridge North Course.

At their final State Tournament, these seniors made memories on and off the golf course. Lewis and Pluchino tried to pump up the team at the practice round on Monday, October 28, by playing classic songs like, “Boogie Shoes” and dancing on the course. That night, the seniors went to Outback Steakhouse, a tradition established in eighth grade. As one of their last nights together as a team, the girls reminisced on all the memories made through the years.

The team missed their desired goal by only one stroke and captured sixth place out of the sixteen teams present. Although they did not crack the top five, the seniors could not be prouder of their accomplishments during their final season. They are confident that the team will be in good hands next year with  junior Bailey Boesch and sixth-grader Georgia Ruffolo.