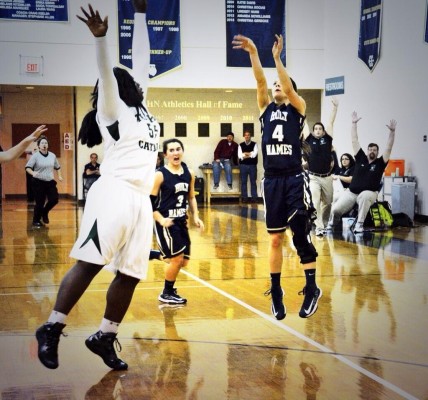 Ashley McWilliams, who recently scored a double triple (scoring two digits in assits, rebounds, and points), shared with Achona her journey as an Academy athlete. This 5 foot 7 inch senior led the AHN basketball team as captain throughout their outrageously successful season. Currently, the team is heading into regional finals with a 50-47 win over hometown rival Tampa Catholic in the regional semi’s. Ashley averages 12.8 points per game and is ranked 104th in the state.

Basketball at the Academy is nothing new for Ashley. She has been playing on the high school team for 6 years now. How is that possible? She joined the high school junior varsity team starting in 7th grade and started playing on varsity once she entered high school.

Second semester of her junior year Ashley seriously injured her ACL. “I tore my anterior cruciate ligament (ACL) and my meniscus. I had surgery in January. It took 10 months to be cleared and start playing again.”

Though this injury put Ashley’s playing time on hold, she used the time to mentally grow stronger. Although she could not fully workout, Ashley went through vigorous physical therapy including “rehab and therapy everyday, plus helping my team by giving advice during practice and games.” Ashley believes her injury actually helped make her a better athlete. “It makes me work harder and appreciate being able to play even more. Also it opened my eyes to how important proper training and stretching really is.”

She has shined so much this year, in addition to her underclassman years, so colleges are eager to have her on their team. Ashley plans to play in D2 schools where she can immediately start on the team with great playing time. “I have no schools in particular, but I am focused on D2 schools preferably in Florida.”

Even after an injury, Ashley thrived during her senior basketball season at AHN. Each game Ashley keeps improving and the whole Academy student body cannot wait to see how well she does at regional finals. Your sisters all wish you good luck!