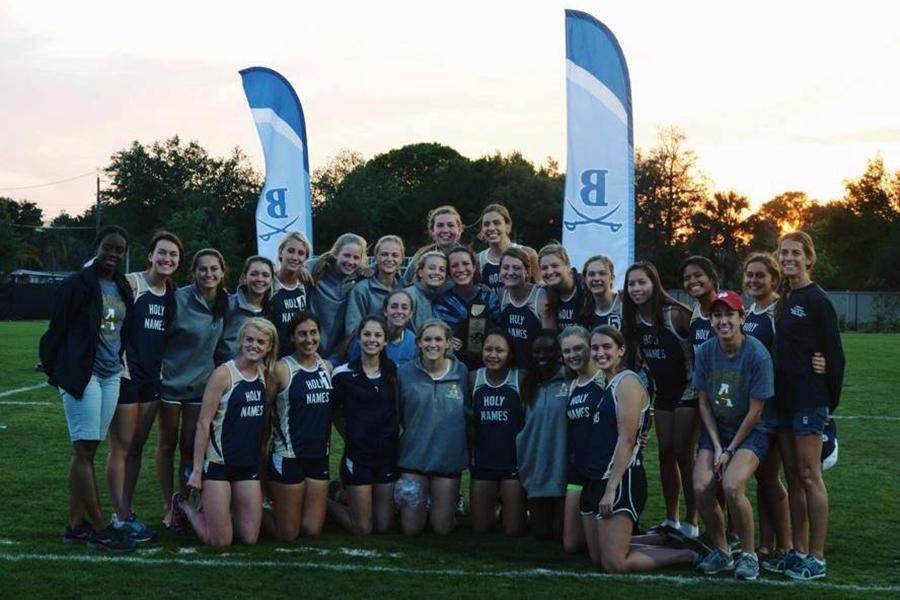 Academy track gains district title for the fifth year in a row.

Academy of the Holy Names’ track team raced into victory at the Class 2A district meet last Thursday at Berkeley High School. The Berkeley team held first place for a majority of the day, with Academy girls fighting to close the gap. Academy ended the day with first place beating Berkeley by .5 points, 211.5-21.

The turning point of the meet was the two-mile race. Claire Snyder, with a time of 12 minutes and 2.21 seconds, took first place. With junior Colleen Doherty, sophomore Jamie Jurado, and senior Allie Reichert taking second, third, and fifth, Academy significantly closed the point gap to 1.5 points between Berkeley and Academy. Snyder, Doherty and Jurado will  advance to Regionals for the 3200 meter race.

To finish the meet with first place, the team knew the 4×400 relay would have to beat Berkeley’s relay team. Both teams fighting for first, it was a nail biting race. “It was  group effort. We all knew we had to run our hardest.” Said junior and relay team member Carmelle Kuizon. Sophomore Gillian Anthony, final leg of the relay, was able to bring the team into a first place victory, at a time of 4:11.81. Berkeley’s relay finished at 4:13.22 The 4×400 meter relay will advance to Regionals.

Every point earned contributed to Academy’s win, however there were a few events that, similarly to the 3200 meter race, gained a significant amount. The 800 meter race was one of those.

Jurado and freshman Elizabeth Dolan both gained a personal record during the 1400 meter race. Jurado and Dolan took fourth and fifth, with times of 5:43.46 and 5;48.31. Snyder took first place in the mile with a time of 5:21.94. Snyder and Jurado will race in the mile at Regionals.

Many other girls on the team placed and Academy will have someone representing the team in each race at the Regional meet.

After celebrating their win, Academy gets ready for Regionals on Wednesday, April 16th.