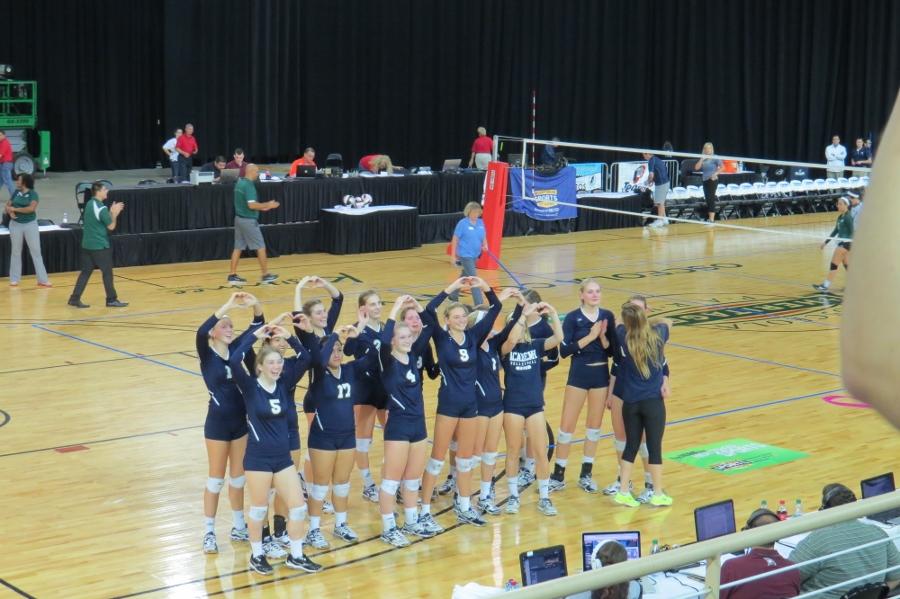 The volleyball team turns to students in the stands while holding up hearts to show their love.

For the first time in seventeen years, the Academy of the Holy Names Varsity Volleyball team made it to States. On November 11th, the girls took on Ft. Lauderdale Pine Crest at Silver Spurs Arena in Kissimmee. To celebrate the team’s outstanding success, Academy’s administration invited the students to cheer on the team at Wednesday’s game, and a majority of students took the opportunity to go.

The Pine Crest Panthers beat Academy in the first and second set of the game. The first set ended at a score of 25-20, and the second ended with a score of 25-16. During the second set, Sophomore Kendall Bulleit scored an ace which made the score 21-15. Things began to turn around for the Jaguars when the third set opened up with Academy in the lead. The score remained close through the whole set, and the teams tied multiple times. During the third set, Seniors Courtney Vogler and Becca Prossen made an incredible block, making the score 23-24 with Jags in the lead. Freshman Vanessa Davila ended the set with an ace which lead the Jaguars to win their first set of the afternoon. The end of the set had an immensely close score of 23-25. Next game, the fourth set, which started out with the two teams tied. Another great play occurred during this set when Sophomore Megan Przedpelski scored an ace.

The Panthers closed up the set with a score of 25-15, and finished the game winning three out of four sets. When asked about how she believes they played, Freshman Vanessa Davila revealed, “I think we performed the best we could. Even though we lost, we played and lost as a family and we played for each other, especially our seniors.” She was also asked about how she felt when she discovered the team was going to states, and exclaimed, “I was extremely excited when we found out we were going to states. I was so happy that I got to go to states as a freshman with all of my sisters.”

A majority of Academy’s student body went and supported the girls. It was a huge game for the senior players, as it was their last high school volleyball game. The students who came to support the team ranged from all different grade levels and some were members of Golden Girls and the dance team. The girls did an incredible job of supporting the team by holding up signs and screaming words of encouragement. At the end of the game, the volleyball team stood in front of the bleachers while the students recited the alma mater. As a response, the team held up their hands in a heart formation to express their love and gratitude towards the student body. It was an overall fantastic game and fantastic season for the volleyball team.